Scientific Name: Pseudacris triseriata
Taxonomy Group: Amphibians
COSEWIC Range: Ontario, Quebec
COSEWIC Assessment Date and Status Change: April 2008
COSEWIC Status: Threatened
COSEWIC Status Criteria: A2bc
COSEWIC Reason for Designation: Ongoing losses of habitat and breeding sites for this small frog due to suburban expansion and alteration in farming practices have resulted in losses of populations and isolation of remaining habitat patches. Populations in Quebec are documented to have declined at a rate of 37% over 10 years and are expected to continue to decline. Despite there being some areas where chorus frogs remain evident, surveys of populations in Ontario indicate a significant decline in abundance of 30% over the past decade.
COSEWIC History of Status Designation: The species was considered a single unit and designated Not at Risk in May 2001. Split into two populations in April 2008. The Great Lakes / St. Lawrence - Canadian Shield population was designated Threatened in April 2008.
SARA Status: Schedule 1, Threatened
Date of Listing (yyyy-mm-dd): 2010-02-23 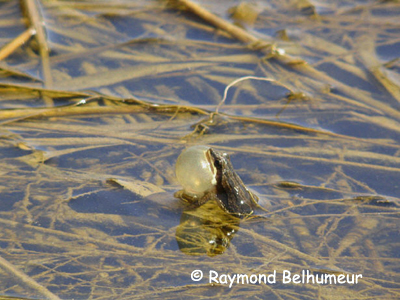 The Western Chorus Frog is a small frog. It measures about 2.5 cm in length weighs about 1 g. Its slightly elongated body is shaped somewhat like a small pear, and its head is narrow and pointed. It has long toes with very small toe-pads. The skin is finely granular in texture. The coloration varies from brown to grey to olive. The most striking marks on the body are the three dark lines along the back, hence the Latin name triseriata. The Western Chorus Frog also has a white line on its upper lip and a dark line from the tip of the head to the groin. Males have a vocal sac, which appears as a dark flap when relaxed and as a yellow balloon when expanded. In the spring, the distinctive croaking of the Western Chorus Frog makes it easy to detect. The call of the male resembles the sound of a fingernail being drawn along a metallic comb. This croaking call resonates; in favourable weather conditions it can be heard from almost a kilometre away. The Western Chorus Frog is a very secretive species and is rarely seen outside the breeding season.

In Canada, the Western Chorus Frog is found in southern Ontario and southwestern Quebec. It is also present in the central and northeastern United States, from Kansas and Oklahoma to Michigan and northern New York. In southern Ontario, its range is bounded by the United States border in the south, Georgian Bay in the northwest, and south of Algonquin Park and up the Ottawa River valley to the vicinity of Eganville in the east. In Quebec, it is found in the Outaouais region (along the Ottawa River between Gatineau and Île du Grand Calumet) and in the Montérégie region (south of the St. Lawrence River, including Île Perrot, in the southwestern part of the province). There are approximately 100 locations, divided into two distinct populations: the Carolinian population (southwestern Ontario) and the Great Lakes/St. Lawrence–Canadian Shield population (other regions of Ontario and Quebec).     It is impossible at this time to give even a rough estimate of the abundance of the Great Lakes/St. Lawrence–Canadian Shield population of the Western Chorus Frog in Canada. Since the 1950s, population losses of about 37% per decade have been documented in Quebec. From 1995 to 2006, population numbers at Ontario sites decreased at an estimated rate of 3.5% per year, resulting in a total decrease of 30%. In many cases where populations have declined because of changes in land use, the populations have not recovered.

The Western Chorus Frog is primarily a lowland terrestrial species. In marshes or wooded wetland areas, it is found on the ground or in low shrubs and grass. It is a poor climber. Like all other frogs, the Western Chorus Frog requires both terrestrial and aquatic habitats in close proximity. For breeding and tadpole development, it requires seasonally dry temporary ponds devoid of predators, particularly fish. The Western Chorus Frog is very rarely found in permanent ponds. Although it uses aquatic habitat during the breeding season, the Western Chorus Frog is a poor swimmer.   The species hibernates in its terrestrial habitat, under rocks, dead trees or leaves, or in loose soil or animal burrows, even though these sites are sometimes flooded.   Habitat destruction in suburban areas of southwestern Quebec is so rapid that populations there may be extirpated from their known habitats by 2030. Habitat loss in agricultural areas is slower, but, as was observed in southwestern Quebec between 1950 and 1990, changes that intensify agricultural practices can produce rapid and catastrophic decreases in Western Chorus Frog populations.

Western Chorus Frogs generally live no more than a year and breed in the first spring after metamorphosis. In Canada, the Western Chorus Frog breeds mainly in April, sometimes beginning as early as the end of March, with calling sometimes continuing until mid-May. The Western Chorus Frog is among the first species to call in the spring. Females lay between 373 and 1500 eggs in small irregular masses in shallow water. The eggs adhere to submerged vegetation or sink below the surface of the water. They hatch 3 to 27 days later (depending on water temperature). It takes approximately two months for tadpoles to change into froglets, which grow very quickly and reach maturity in late summer. Tadpoles feed on algae, and froglets feed on small invertebrates, such as beetles, mites and other small arthropods. During summer and fall, Western Chorus Frogs eat a variety of small invertebrates, such as ants, spiders, slugs and snails. The Western Chorus Frog has many potential predators, including insects, leeches, salamanders, fish, snakes and birds. The high mortality rate at all life stages means that the survival of a population depends on the recruitment of new individuals each year.

In Canada, the most serious threat to the Western Chorus Frog is habitat destruction or alteration. Most of the sites of the Great Lakes/St. Lawrence–Canadian Shield population are located on land owned for future development. For urban construction or industrial agriculture, the land is drained and filled, resulting in the direct loss of many individuals, the elimination of the temporary ponds required for breeding, and significant degradation of the quality of the remaining terrestrial habitat. This process results in smaller habitat areas that are fragmented into isolated patches. The Western Chorus Frog has great difficulty adapting to habitat fragmentation and reduced habitat quality. The frogs have relatively low mobility and relatively high fidelity to their natal ponds. The population of pond-breeding frogs fluctuates greatly from year to year. This means that if a reduction in habitat quality coincides with a natural decrease in population numbers, local extinction is very likely to result.   Vehicular traffic on roads is another factor threatening the Western Chorus Frog. Roads of any size inhibit dispersal of the frogs and cause some mortality.   Chemical pollutants can pose a direct threat to the health of amphibians. Frog populations are particularly vulnerable to nutrient loading from industrial agriculture. Many breeding sites are also vulnerable to contamination by pesticides, herbicides and other pollutants.

The Western Chorus Frog, Great Lakes / St. Lawrence - Canadian Shield population, is protected under the federal Species at Risk Act (SARA). More information about SARA, including how it protects individual species, is available in the Species at Risk Act: A Guide.