Scientific Name: Hippoglossoides platessoides
Taxonomy Group: Fishes
COSEWIC Range: Atlantic Ocean
COSEWIC Assessment Date and Status Change: April 2009
COSEWIC Status: Threatened
COSEWIC Status Criteria: Met criteria for Endangered, A2b, but designated Threatened, A2b, because of large, stable area of occurrence and large remaining number of adults.
COSEWIC Reason for Designation: This right-eye flounder burrows in the sediment to escape predators and ambush prey. It is widely distributed on both sides of the North Atlantic Ocean, from the Barents Sea to the British Isles in the east, and from northern Baffin Island to Rhode Island in the west. This population occurs in the Gulf of St. Lawrence, the Scotian Shelf, the Bay of Fundy and Georges Bank. A relatively sedentary, non-schooling species, it was likely once the most abundant flatfish in the northwest Atlantic. Over a 36 year time series, (about 2.25 generations) abundance of mature individuals has declined about 86% in the Gulf of St. Lawrence, and 67% on the Scotian Shelf. Overfishing is a major cause of the decline, but an apparent increase in natural mortality in the 1990s, when the largest part of the decline occurred, may also have contributed. The decline appears to have ceased in the Gulf but may be continuing on the Scotian Shelf. There are small ongoing directed fisheries in the Gulf with a quota in the south but no quota management in the north. On the Scotian Shelf and in the Bay of Fundy, this species is managed together with other flatfishes as a multispecies stock and there are no specific management measures to ensure sustainability.
COSEWIC History of Status Designation: Designated Threatened in April 2009.
SARA Status: No schedule, No Status
Date of Listing (yyyy-mm-dd): 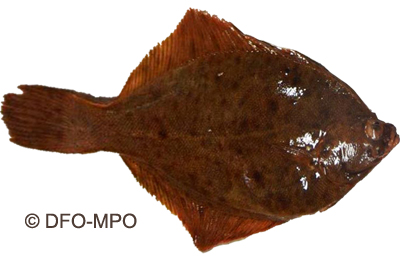 American plaice (Hippoglossoides platessoides) has the following characteristics: a flat fish with a rounded caudal fin, the mouth is large and the jawbone extends to below the mouth, the top portion of the body is reddish-brown while the bottom portion is white and adults can grow upwards of 60 cm in length. American plaice, a relatively slow growing fish, has a unique flattened body. When a young plaice hatches, it has a normal fish shape. During development, when it settles to the bottom of the ocean, the side of its body becomes flat and its left eye migrates to the right side of the body so that the plaice swims on its side. The upper side (which now has both eyes) is normally coloured so that the plaice can camouflage itself in the sediment. In American plaice, both eyes are almost always found on the right side of the body. (Updated 2017/02/22)

The Maritime designatable unit of American plaice occurs in the Gulf of St. Lawrence, the Scotian shelf, the Bay of Fundy and Georges Bank. It is part of Northwest Atlantic Fisheries Organization (NAFO) divisions 4RST, 4Vn and 4VsWX. Eggs and Larvae are pelagic. Juvenile and adults commonly burrow in the sediment. They prefer depths of 50 to 200 meters and water temperatures ranging from 0 to 1.5°C. (Updated 2017/02/22)

Overfishing has been the main threat to American plaice. Natural mortality has increased in the Maritime designatable unit, causing most of the declines of recent decades and the failure of the stocks to recover significantly following reduced fishing. There may be several factors contributing to high natural mortality, including predation and adverse environmental conditions. Illegal discarding of small fish is also believed to have contributed to the decline in the Maritime population. (Updated 2017/02/22)