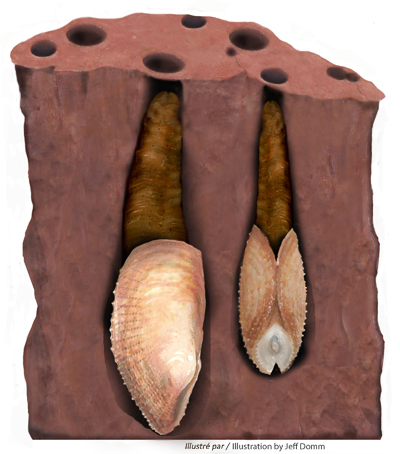 The Atlantic Mud-piddock is found in the intertidal zone, meaning it is above water at low tide and under water at high tide. In Canada, the species burrows into only one type of surface called red mudstone, which is somewhat firm and offers protection. Individuals become entrapped in their burrows as they grow, where they remain for their lifetime. When they die, the resulting burrow can provide habitat for other marine species.

The Atlantic Mud-piddock is found along the eastern and western continental margins of the Atlantic Ocean, from Florida to Nova Scotia and from South Africa to Senegal. In Canada, the only population is found in the Minas Basin, Bay of Fundy, approximately 475 km from the next nearest population in Maine. Red mudstone in the Minas Basin is extremely limited, totalling less than 1.84 km². The Bay of Fundy’s high tides and large temperature fluctuations provide highly oxygenated waters with lots of suspended particles for the molluscs to feed on.

Atlantic Mud-piddock live separately from one another in their burrows, releasing their eggs and sperm into the surrounding water. Fertilized eggs grow into larvae. After 35 days of growth, the larvae settle and begin burrowing when they contact red mudstone. The population size is unknown, but thought to be stable.

The main threat to the Atlantic Mud-piddock is changes to the ocean bottom, particularly increases in sediment, such as sand, over their limited habitat. Increases in sediment can smother the animals and make their limited habitat unusable. These changes may occur as a result of natural processes, such as tidal erosion, ice scouring and major storm events. There is concern that increased storm activity and sea-level rise due to climate change may negatively impact the species. In addition, dredging, large scale tidal turbine operations, and oil spills may pose potential threats. Recreational activities, such as running, mountain biking, and using ATVs may harm Atlantic Mud-piddock or destroy their habitat.