This species requires rivers or streams that are generally clear, cool and well-oxygenated for reproduction and the first few years of rearing, but undertakes lengthy feeding migrations in the North Atlantic Ocean as older juveniles and adults. This population breeds in rivers on Anticosti Island. Small (one-sea-winter) and large (multi-sea-winter) fish have both declined over 3 generations, approximately 32% and 49%, respectively, for a net decline of all mature individuals of about 40%. The population size is small, about 2,400 individuals in 2008. As is the case for most populations of the species, poor marine survival related to substantial but incompletely understood changes in marine ecosystems is a concern.
COSEWIC History of Status Designation: Designated Endangered in November 2010.
SARA Status: No schedule, No Status
Date of Listing (yyyy-mm-dd): 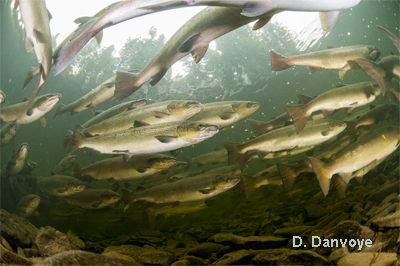 The Atlantic Salmon has a fusiform body shape that is somewhat compressed laterally and has an average length of about 457 mm. Its back is blue-green, its sides are silvery with several markings that are either round or x-shaped, and its belly is white. During the reproduction period, the Atlantic Salmon loses its silver colour and takes on a greenish or reddish hue; a few large, white-edged spots then appear on its sides.

Because Atlantic Salmon have a high degree of fidelity to their natal rivers and given their adaptation to the stream they frequent (e.g., difference in morphology, life cycle and behaviour), the Committee on the Status of Endangered Wildlife in Canada (COSEWIC) has identified 16 designatables units (DU) of Atlantic Salmon, 11 of which are considered at risk. Atlantic Salmon of the Anticosti Island population (DU9) reproduce only in the island's tributaries. This population has 25 known salmon rivers.

Salmon spawning rivers are generally clear, cool and well oxygenated, with gravel, cobble and boulder substrates. Young salmon born in the streams and the adults that spawned them then migrate from a freshwater environment to brackish-water estuaries and then to the open sea where they spend several years.

Atlantic Salmon spawn in fresh water, generally in their native river. Juveniles spend one to eight years in fresh water before migrating to salt water in the North Atlantic. After staying at sea for one to four years, adults return to fresh water to spawn.

The causes of the widespread decline of Atlantic Salmon are not well understood. Several major reviews have attempted to identify and prioritize the causes of this situation. The low rate of survival at sea was cited as the primary cause of the decline. The populations are also threatened by climatic changes and environmental changes in the ocean; Aboriginal, recreational and illegal fishing; obstacles in fresh water (e.g. dams); agriculture; urbanization; aquaculture and invasive species. In some cases, the habitat used for freshwater spawning is degraded.The small size of the Anticosti Island population (about 2,400 individuals in 2008) is cause for concern. Over the past three generations, the number of small (that spent one winter at sea) and large (that spent more than one winter at sea) individuals has decreased, representing a net decline of approximately 40% in the total number of mature individuals.

The Atlantic Salmon commercial fishery was closed progressively in Canadian waters from the mid-1980s until the complete closure in 2000. Aboriginal peoples continue to fish in several salmon rivers for food, social and ceremonial purposes. Salmon represents an important cultural tradition to which they attach great value. Lastly, recreational fishing is still authorized. Restrictive management measures are imposed for each river based on abundance estimates. These measures include catch limits, mandatory release of large salmon to the water, and closures of certain watercourses. Salmon habitat is protected under the fish habitat protection provisions of the Fisheries Act.