This large-bodied, slow-growing, and late-maturing fish consists of a small breeding population spawning within a relatively small area. The species is exploited in a regulated commercial fishery, but limited monitoring of the effects of this fishery make the viability of this population highly uncertain.
COSEWIC History of Status Designation: Designated Threatened in May 2011.
SARA Status: No schedule, No Status
Date of Listing (yyyy-mm-dd): 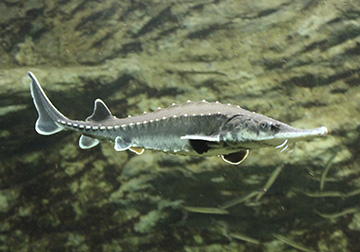 The Atlantic Sturgeon is a large-bodied, slow-growing and late-maturing anadromous fish, which lives and grows in brackish, salty water, but spawns in fresh water. The largest fish to be captured in the St. Lawrence River (160 kg or 350 lb) was estimated to be about 60 years old.

In the St. Lawrence River, males reach sexual maturity between the ages of 16 and 26, while females may reach maturity around age 27 or 28. Because of its large size, the female Atlantic Sturgeon is extremely fertile. A 148-kg female was reportedly captured in the St. Lawrence River with 41.4 kg ovaries containing about 3,700,000 eggs. The Atlantic Sturgeon does not spawn every year. Males probably reproduce every 3 to 4 years, while this interval is longer for females. In the St. Lawrence River, spawning occurs in June and July, after which the adults migrate further downstream in the Estuary and the Gulf. Juveniles begin their migration once they have reached 80 to 120 cm.