This short-lived semelparous species is extremely rich in lipid and spends over 95% of its life in the marine environment. All of the populations in the Central Pacific Coast area are substantially lower than what supported large First Nations fisheries in the 1800s and before. Each river for which there are records has experienced drastic declines in run size, some to the point of virtual extirpation including the Kitimat, Kemano, Bella Coola, and those in Rivers Inlet. Substantial declines have also been documented for the Kingcome and Klinaklini Rivers, however there remain modest returns in these areas.
COSEWIC History of Status Designation: Designated Endangered in May 2011.
SARA Status: No schedule, No Status
Date of Listing (yyyy-mm-dd): 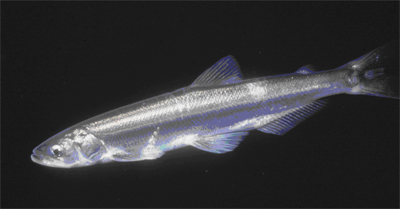 Eulachon is an anadromous fish endemic to the Northeastern Pacific, and one of the ten smelt species in the Family Osmeridae.  This species is also referred to as candlefish, oolichan, and ooligan, amongst others.   Eulachon are well known for their high oil content and have great significance to First Nations as a food source and in bartering with other coastal and interior tribes.

Eulachon are found throughout the Pacific Coast from northern California to the eastern Bering Sea. Within British Columbia, Eulachon occur in at least 38 rivers; however, this species spends over 95 percent of its life in the marine environment. Eulachon spawn, almost exclusively, in rivers that have a spring freshet and are glacially fed. Since the mid 1990’s, Eualchon populations south of the Alaska border have declined precipitously and coincidentally.

Eulachon spend more than 95 percent of their life in the marine environment, and only uses freshwater during spawning, egg and early larval stages. After hatching, larval Eulachon quickly move out into the estuary where they spend some months migrating offshore in the fall. Adult Eulachon are demersal and are most frequently found at depths of 70 to more than 200 meters.

The factors causing the coast wide decline of Eulachon populations are unclear.  Threats to individuals as well as their habitat occur in both freshwater and marine environments.  Presently, commercial fisheries for Eulachon are closed.  Historically, commercial fisheries existed on the Fraser, Nass, Skeena, Klinaklini, and Kingcome Rivers.  Recreational fishing in freshwater systems with nets is prohibited and tidal water recreational harvesting is open in areas that do not show conservation concerns. First Nation fisheries for Eulachon once occurred on many rivers, but many are currently closed due to declines in runs.  Eulachon is incidentally caught in commercial fisheries, primarily the shrimp trawl and groundfish trawl.  Habitat degradation occurs at a local scale and varies between spawning rivers.  Activities likely to impact Eulachon mortality include dredging, industrial and agricultural pollution, shoreline development, and forestry. However, it is unlikely that such threats would explain the nearly synchronous coast-wide decline of Eulachon that has occurred. Climate change effects may impact both the marine and freshwater habitats.

Eulachon was assessed by COSEWIC in May 2011 as Threatened for the Nass/Skeena Rivers population, and Endangered for the Central Pacific Coast and Fraser River populations. The Nass/Skeena Rivers population of Eulachon was re-assessed by COSEWIC in May 2013 as Special Concern. Due to conservation concerns Fisheries and Oceans has undertaken several specific activities since 1995 to protect Eulachon, including: closure of the commercial Eulachon fishery on the Fraser; suspension of dredging on the Fraser River during Eulachon spawning season; closure of the shrimp fishery in Queen Charlotte Sound; implementation of bycatch reduction measures in the commercial shrimp trawl fishery including bycatch reduction devices and potential closures when cumulative Eulachon bycatch level is reached; full closure of recreational harvesting for Eulachon in all tidal waters and freshwater systems; and an annual egg/larval survey to monitor stock on the Fraser in conjunction with First Nations.