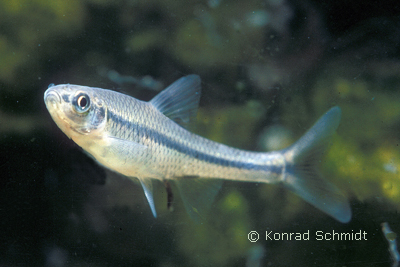 The Plains Minnow (Hybognathus placitus) is a member of the Cyprinidae family. The Plains Minnow is one of four species of Hybognathus found in Canada. It has the following characteristics and distinguishing features: A small-sized fish between 50 and 90 millimeters in total length, with some specimens as large as 125 millimeters; Slim, slightly compressed body; Short triangular head; Blunt snout; Relatively small eyes; Fins tend to be pointed, rather than rounded; Body colour is tan to olive towards the back, silver along the sides and white along the belly; Maximum weight of 15 grams; Spawning males develop small bumps (tubercles) on the top of the head and back, as well as on the pectoral fin. Individuals can live up to two to three years.

The Plains Minnow has a widespread distribution in the United States, occurring in the middle of the continent from eastern New Mexico, central Texas and western Arkansas, north to North Dakota and Montana. The existence of the Plains Minnow in Canada was discovered in 2003 in southern Saskatchewan, with its distribution limited to Rock Creek and a portion of one of its tributaries, Morgan Creek. The Plains Minnow lives in schools, and is found in sand-and silt-bottom rivers and streams of the Central Great Plains. Found in a range of small creeks to fairly large rivers, the Plains Minnow prefers slow, relatively shallow to moderately deep waters with a range of turbidity. Many of these small- to medium-sized streams experience natural seasonal fluctuations, from drought conditions to flash floods and heavy precipitation, indicating a high level of adaptation in withstanding natural changes in water quality. Spawning takes place in areas of moderate flow to maximize the downstream distribution and incubation of the fertilized eggs. As the discovery of the Plains Minnow in Canada is relatively recent, the majority of the information about its life history is based on U.S. populations. The Plains Minnow lives for about two to three years, and breeds for the first time in its second year. Many individuals die after spawning. The Plains Minnow has an extended spawning period, frequently reproducing after major flow peaks. The majority of reproduction takes place in spring; however, it has also been recorded in the summer. Females carry less than 1,000 eggs. Once hatched, growth takes place quickly and juveniles nearly reach their adult size by the end of their first summer.

This fish has a very limited distribution in Canada, and has only been found in one area of southern Saskatchewan. At the northern extent of their range, this region of southern Saskatchewan is subject to drought, temperature extremes, decreasing habitat quality from agricultural runoff and potential effects of invasive species (such as the Common Carp).