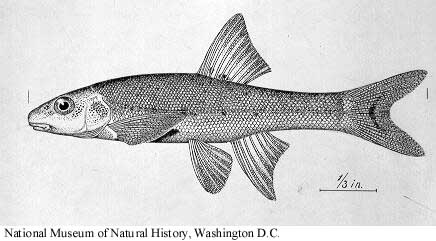 This member of the carp family has a dark upper head and back, and mostly creamy flanks with some irregular dark spotting. Breeding males develop orange to red pelvic fins. The robust body reaches lengths of about 12 cm. The mouth is inferior, with the snout projecting beyond the upper lip, and the upper lip separated from the snout by a groove. The species is distinguished by a short, rounded barbel at each corner of the mouth.

Populations of the Umatilla Dace in the Similkameen, Kettle, Columbia, Slocan and Kootenay river drainages represent the only known occurrences of the species in Canada. In the U.S., the species occurs throughout the Columbia drainage from the Bonneville Dam northward, and probably occurs in rivers of northern Oregon and in the Snake River in Idaho. Upstream populations in the northern U.S. and in Canada are isolated from downstream Similkameen, Okanagan and lower Columbia populations by impassable falls or other inappropriate habitat. Further upstream dispersal of the fish in the Similkameen River and its tributary the Tulameen may be limited by waterfalls and/or the colder water temperatures of higher mountain elevations. With the exception of 20 large (>40 mm) Umatilla Dace taken from Otter Creek, only 13 adults have been collected in British Columbia. Juveniles have been found in nearshore habitat in the lower Similkameen, Kettle, Kootenay and Columbia waters within B.C. No juveniles were found with the adults in Otter Creek, suggesting that reproduction is not successful there. Population trends are not available, but records indicate that the species has occurred in the Similkameen River drainage since at least 1963, and in Otter Creek since 1956.

The species prefers riverine habitat with cobble and stone cover, where the current is fast enough to prevent siltation. The fish are usually found along the river banks, at depths of less than 1 m. Both the Kootenay and Columbia rivers possess extensive stretches of large, rounded and polished stones where sediment is washed away by currents during spring floods. The spaces between the rocks provide shelter for large fish, and the dense covering of green algae on the rocks during the summer and fall provides a source of food. The fish appear to favour relatively productive low elevation waters, where food may be more abundant than in the colder, unproductive water of higher elevations. Suitable habitat appears to be widespread in the Columbia River downstream from the Keenleyside dam at Castlegar, B.C., but modification of river flow by the dam appears to be preventing the species from occupying this stretch of the river. In general, present and planned dams for hydro-electricity projects are converting riverine habitat to reservoir habitat downstream. The impact of these changes on Umatilla Dace populations needs to be assessed.

Breeding probably occurs in late spring and in summer, if it is similar to closely related species. The young of the year are generally smaller than 40 mm in length. The life span and growth rates of adults have not been determined.

The presumed preference of this species for cobble and stone habitat with sufficient current to remove silt, suggests that the fish are vulnerable to habitat changes which increase siltation. Siltation could result from dam construction or run off, changes from riverine to reservoir habitat, and pollution from industrial, agricultural or domestic activities. The impacts of competition from other benthic fish species and predation on the population size of the Umatilla Dace in Canada are not known.

Species that have been designated at risk by COSEWIC since the Species at Risk Act (SARA) was written must be added to Schedule 1 through a regulatory amendment. Information on this procedure is available in the Assessment section. If Umatilla Dace is added to Schedule 1, it will benefit from the protections afforded by SARA. More information about SARA, including how it protects individual species, is available in the Species at Risk Act: A Guide.

The South Okanagan-Similkameen Conservation Program has developed a multi-species and multi-scale approach to natural habitat protection and restoration in the South Okanagan-Similkameen region. It includes increasing landowner awareness of practices that protect habitat for species at risk, including that of Umatilla Dace. A habitat use and life history assessment on the species was also completed by BC Hydro in 2010. The Columbia Water Use Plan required studies on how the species would be influenced by daily and seasonal operation of Keenleyside Dam. These results are considered when water management decisions are made. Stranding risk surveys have been conducted in the Lower Columbia and Kootenay systems since 2010.