Scientific Name: Heterodermia sitchensis
Other/Previous Names: Seaside Centipede
Taxonomy Group: Lichens
COSEWIC Range: British Columbia
COSEWIC Assessment Date and Status Change: May 2021
COSEWIC Status: Threatened
COSEWIC Status Criteria: B1ab(iii,v)+2ab(iii,v); D1
COSEWIC Reason for Designation: This leafy lichen is known from 20 occurrences on the west coast of Vancouver Island, Canada, and from two in the US. It has highly specific habitat requirements and grows only on partially defoliated small-diameter Sitka Spruce twigs on trees, close to the shoreline, that often receive nitrogen enrichment from sea lion haul-out sites or bird nest sites. The number of mature individuals (thalli) is thought to be less than 1000, and the lichen is highly vulnerable to intense storm activity associated with climate change that destroys the twigs upon which the lichen is found. The change of status from Endangered reflects increased knowledge of the distribution as a result of increased survey effort.
COSEWIC History of Status Designation: Designated Endangered in April 1996. Status re-examined and confirmed in May 2000 and in April 2006. Status re-examined and designated Threatened in May 2021.
SARA Status: Schedule 1, Endangered
Date of Listing (yyyy-mm-dd): 2003-06-05 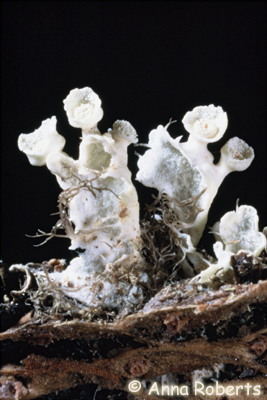 Seaside Centipede Lichen is a semi-erect, leafy lichen that is shaped like a cushion. On average, this tiny lichen grows to 2 cm in width. The lobes are thin, stiff, separate and irregularly branched. The highly convex upper surface of the Seaside Centipede Lichen is a pale greenish white with a few scattered whitish spots. The lower surface is white and cottony. This species can be recognized by the presence of long, hair-like structures along the edges of its lobes and by the small urn-shaped structures near the tips of its lobes. The urns have prominent flaring rims and the inner surfaces of these rims are covered with numerous soredia (powdery reproductive structures).

In Canada, the Seaside Centipede Lichen is limited to the old-growth Western Hemlock forests along the west coast of Vancouver Island. This species will only grow on the nitrogen-rich lower branches of Sitka Spruce trees. This lichen has very specific habitat requirements. Its presence appears to depend on the convergence of several factors, including proximity to the ocean and the seaward orientation of the site, the presence of old Sitka Spruce trees with defoliated lower branches, and the presence of sites rich in nitrogen and calcium such as sea lion haulouts or seabird nesting sites.

Logging operations constitute the main threat to the Seaside Centipede Lichen, due particularly to the enormous commercial value of its host, the Sitka Spruce.   Other threats to this species include housing developments, such as the project that resulted in the disappearance of a population in the southern part of Ucluth Peninsula and, albeit to a lesser extent, the gathering of branches by campers for use as firewood.   Seaside Centipede Lichen is very vulnerable to the increasingly harsh winter storm activity associated with global warming.

Half of the Canadian population of Seaside Centipede Lichen is in the Pacific Rim National Park Reserve where it is protected by the Canada National Parks Act.