Scientific Name: Nephroma occultum
Other/Previous Names: Cryptic Paw
Taxonomy Group: Lichens
COSEWIC Range: British Columbia
COSEWIC Assessment Date and Status Change: May 2019
COSEWIC Status: Threatened
COSEWIC Status Criteria: A3c+4c
COSEWIC Reason for Designation: This leafy lichen is endemic to western North America. In Canada the total estimated population is approximately 12,000 individuals. The species has specific habitat requirements, growing in humid old coastal and interior cedar-hemlock forests that have depressions kept moist by input from groundwater. The lichen reproduces only by vegetative propagules with limited capability for dispersal. The species is threatened by habitat loss as a result of forest harvesting, and by climate change leading to altered patterns of winter precipitation and warmer drier summers that can enhance the frequency and severity of fires. The IUCN Threats assessment calculator result for this species was Very High to High.
COSEWIC History of Status Designation: Designated Special Concern in April 1995 and in April 2006. Status re-examined and designated Threatened in May 2019.
SARA Status: Schedule 1, Special Concern
Date of Listing (yyyy-mm-dd): 2007-12-13 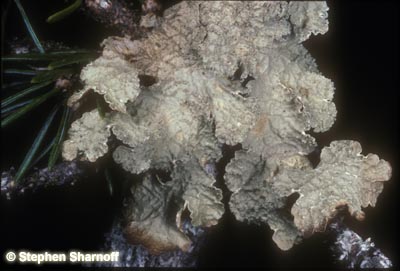 The lichen is leafy, rounded and loosely pressed in appearance. It measures 3 to 7 cm across. The upper surface is pale yellowish- to greenish- or bluish-grey, while the lower surface is pale tan at the edges, blackish toward the centre. Both sides are dull and naked. The bottom is finely wrinkled. A lichen is a plant organism composed of a fungus and an alga in symbiotic association.

The Cryptic Paw Lichen is found only in the Pacific Northwest of North America. There are 28 locations in which the lichen is known to occur (21 in British Columbia, five in Oregon, two in Washington). The density of these lichens ranges from distinctly sparse to locally frequent (20 thalli (plant-bodies) per square metre considered frequent). Only one or two thalli per site were recently found in more than half the B.C. sites, but virtually all the plants were vigourous.

The Cryptic Paw Lichen is restricted to humid old-growth forests at lower elevations in mountainous regions. It appears to have very specific ecological requirements, which include high humidity and moderate summer temperatures.

Continued logging of B.C.'s old-growth forests is causing the species' steady, seemingly permanent, decline. Once the plant has disappeared from a site, it is not likely to reoccur in secondary-growth replacement forests. The species' limited distribution results mostly from its specific climatic requirements. Natural causes of mortality are competition from other lichens and forest defoliation by insects.

Team for the Cryptic Paw Lichen