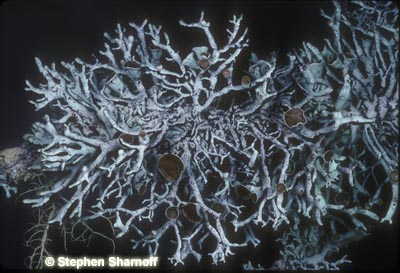 The Seaside Bone is a finely branched lichen that grows on trees. Its main body, called a "thallus," is heavily branched and measures 5 to 8 cm across. The thallus generally resembles a small bush made of lobes that are hollow, pliable and often of uneven width. The lobe cavity is dark brown. The lobes typically branch into two long, narrow lobules that are perpendicular to the lobe margins and resemble tiny claw-like fingers. These lobules are a distinctive characteristic of the species. The greenish grey upper surface of the thallus is often marked by numerous black dots. These are the pycnidia, the reproductive organs. The lower surface of the lichen is black, shiny and wrinkled. The thallus commonly forms apothecia, tiny fruiting bodies that produce sexual spores used for reproduction. Disc-shaped apothecia can measure up to 8 mm in diameter and are raised on short stalks. The disc is brown and holds eights spores per fruiting body. The spores are colourless and somewhat elongated.

The Seaside Bone is found only on the west coast of North America. The distribution of this lichen ranges from southern British Columbia in the north to Puget Sound, Washington, and along the coast of Oregon and California to the coastal regions of Santa Barbara, Los Angeles and the Channel Islands. In Canada, where the species was first found in 1991, the four known locations where the Seaside Bone occurs are at the southwest tip of Vancouver Island in East Sooke Regional Park, Bentinck Island and Sheringham Point. The species seems to be limited to a narrow 10-km strip. Canadian populations are found northwest of the populations in Puget Sound, Washington, from which they are separated by the Strait of Georgia and the Strait of Juan de Fuca.     Ten Seaside Bone subpopulations are recorded on Vancouver Island. In 2006, the species seemed relatively abundant in its known locations, where the most abundant sites had more than 100 thalli, while the least abundant sites had just over 10. The total number of thalli was likely greater than 1000. It is believed that in all likelihood, the actual numbers exceed these estimates because the upper branches of trees could not be examined.   Canadian populations appear to be stable, but their occurrence is limited and the species is found in only four locations. The severe winter storms of 2006–2007 may have reduced the East Sooke Regional Park population because many shore pines were knocked down or damaged.

The Seaside Bone grows only on the branches of conifers, particularly Shore Pines, in seaside habitats along the Pacific coast. This lichen is found mainly on coastal ledges at low elevation with high solar radiation, strong winds, moderate precipitation and high humidity. All Seaside Bone sites in Canada are within 1 km of the ocean coast in sparse Shore Pine forests exposed to the elements. Pines in these locations are somewhat stunted and their branches are prone to damage or breaking by offshore winds and winter storms.   This lichen may be limited to the coast because the salt in sea spray is necessary to its development, as seems to be the case with other lichens.

Like all lichens, the Seaside Bone is a plant that consists of a fungus and an alga living in a symbiotic relationship. This type of mutually beneficial relationship is essential to their survival. Sexual reproduction in the Seaside Bone takes place by the dispersal of sexually produced fungal ascospores, which must pair with Trebouxia green algal cells to form an individual. Since the formation of apothecia is fairly common in this species, it is likely that sexual reproduction is equally common; compatible partners seem to be readily available on Shore Pine branches, through intact thalli of Seaside Bones or other lichens, or as free-living algae from decaying lichens.   The Seaside Bone also reproduces asexually by fragmentation of the lobules of its thallus, which hold the fungus and the associated alga. Asexual reproduction is also effected by the production of asexual spores, or conidiospores, produced by the numerous pycnidia (saclike spore cases) on the upper surface of the lobes. Once released, conidiospores are dispersed by wind, water and animals. These asexual spores must be paired with a compatible alga to form a thallus.

The main factor limiting the dispersal of the Seaside Bone is the lack of habitat, attributable to the species' dependence on young shore pine stands on rocky, windswept ledges. Much of the southwest coast of Vancouver Island consists of rocky hills and sandy or cobble beaches, where rocky windswept ledges are less common.   The main threat to the survival of Canadian populations seems to stem from winter storms. The severe winter storms of 2006–2007 damaged many trees in East Sooke Regional Park. All plant debris on the ground was left in place. Therefore, Seaside Bone colonies in trees that were damaged or knocked down by the storms may have survived for some time.   Finally, global warming may constitute a major threat by resulting in greater fluctuations in temperature and precipitation, more severe storms and more coastal flooding.