The Atlantic Walrus is a large, marine mammal with front and hind limbs developed into flippers. It is easily identified by its long canines or tusks, which are longer and bigger on the males than on the females. The skin of the Walrus is dark brown and it is covered by a thin layer of small sparse brown hairs; at birth, this thin layer of hair is silver gray but it quickly turns brown. The males have a large and muscled neck which is formed by a very thick skin. Adult males measure about 3.1 m in length and weigh about 900 kg; females measure approximately 2.6 m and weigh, on average, 560 kg. A newborn Walrus measures about 1.2 m and weighs about 55 kg. 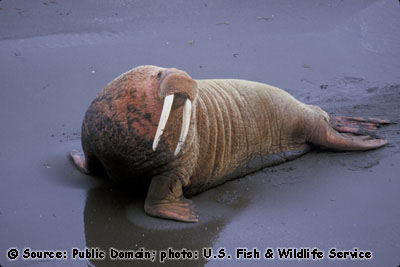 There are no estimates available on the number of Walrus in Canada. Although the species has been extirpated from the Northwest Atlantic, the Mackenzie delta and the St. Lawrence River, Walrus are found in Arctic waters from the polar ice-sheet in the Arctic Ocean to the Bering Sea, James Bay and the Labrador coast.

Walruses inhabit areas of Arctic water where there are ice floes drifting on the shallow waters above the continental shelf. These waters are less than 80 to 100 m deep, and contain benthic invertebrates, the main food of the Walrus. During the winter, Walruses live in areas where water does not freeze, such as polynyas. They prefer living on ice, but during the summer, when ice is rare, they will live on coasts and beaches.

Walruses reach sexual maturity at 6 or 7 years of age. They move onto land or ice to give birth. Females give birth to one young, every three years, during the months of May and June. There is no information available to determine if Walruses migrate or if they form sedentary groups. Walruses depend primarily on molluscs for food, which they dig up from the shallow ocean floor.

Hunting was the main cause of the extirpation of Walruses from the Northwest Atlantic. It is possible that toxic substances build up in their organs, and that oil spills are also detrimental to this species, but the extent of the negative effects is not known. Walruses are very sensitive to other human caused environmental disturbances, such as boats and low-flying airplanes, which cause them to flee. The sudden, hurried movement of a group of Walruses sometimes causes death to animals in the middle of the group. When they are under water, the noise made by boats is very disturbing and probably prevents the Walruses from communicating. Reductions in their food source can also have negative impacts on Walrus populations.