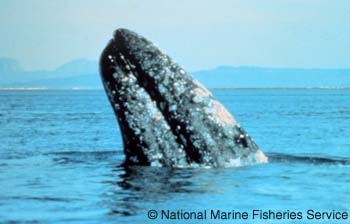 The Grey Whale is a large greyish coloured baleen whale. (Baleen whales have long, thin plates of keratin or baleen hanging from their upper jaws in place of teeth). The Grey Whale's body is heavily parasitized and marked with white scars. It has a small head; a large mouth; nostrils above the eyes; large, broad, pointed pectoral flippers; and rows of hair on the jaws. This whale has no dorsal fin, but it does have a row of humps located in the lower part of the back. The maximum length of these whales is 15 m; the females are larger than the males. At birth, calves measure 4.5 to 5 m.

Historically, the Grey Whale was typically found along the continental shelf of the North Atlantic and North Pacific Oceans. The Atlantic population of Grey Whales has been extirpated; these whales are believed to have visited the Scotian Shelf, the Gulf of St Lawrence, the Grand Banks, and, possibly, Hudson Bay. At present, there are no Grey Whales in the Atlantic, and this population is considered extinct. There are no records which would indicate the size of past populations of Grey Whales in this area. The population that ranges along the Pacific Coast is migratory, breeding in the waters of Baja California, Mexico, during the winter, and moving to feeding areas as far north as Alaska in the spring. These whales may be spotted migrating along the coast of California, or feeding near the coast of British Columbia.

The Grey Whale is a coastal species; it frequents bays and estuaries. These whales use offshore currents during migrations.

Grey Whales reach sexual maturity at five years of age. Females give birth to one calf every two years. The gestation period is of approximately 14 months.

In the Pacific, habitat changes in areas used for calving and breeding is a limiting factor for Grey Whales; these modifications have been caused by human industrial activity. Toxic substances are also a threat, since several Grey Whales are known to have died due to substances such as pesticides, PCBs, and heavy metals. Subsistence whaling still occurs in Alaska and along the Chukotsk Peninsula.

Summary of Progress to Date The Atlantic population of the Grey Whale is extirpated and its recovery is considered neither technically or biologically feasible. The feasibility of recovery will be re-evaluated as warranted in response to changing conditions and/or knowledge or as part of the reporting on the implementation of the recovery strategy every five years.