Scientific Name: Balaena mysticetus
Other/Previous Names: Bowhead Whale (Western Arctic population)
Taxonomy Group: Mammals
COSEWIC Range: Arctic Ocean
COSEWIC Assessment Date and Status Change: April 2009
COSEWIC Status: Special Concern
COSEWIC Status Criteria:
COSEWIC Reason for Designation: The population was severely depleted by commercial whaling from 1848 until about 1915, a period of about 65-70 years. Since 1915, it has been subject to regular hunting for subsistence by Aboriginal people in Alaska (USA) and Chukotka (Russia) and occasional hunting by the Inuvialuit of the western Canadian Arctic. In the absence of commercial whaling, this population has been recovering and was estimated at 10,400 in 2001. Nevertheless, it is not yet clearly secure because of its life history (e.g. long generation time, very low natural growth rate) and the possible impacts of habitat changes. There is uncertainty about how bowheads will respond to the rapid changes in their habitat due to climate change and increasing human activities such as shipping and oil exploration in high latitudes. Such habitat changes have already begun to occur and will intensify over the next 100 years. In view of the species’ life history, it is important that hunting continue to be monitored and managed to ensure against over-harvest.
COSEWIC History of Status Designation: The "Eastern and Western Arctic populations" were given a single designation of Endangered in April 1980. Split into two populations (Eastern Arctic and Western Arctic) to allow separate designations in April 1986. The Western Arctic population was designated Endangered in April 1986. The population was renamed to "Bering-Chukchi-Beaufort population" and designated Special Concern in May 2005. Status re-examined and confirmed in April 2009.
SARA Status: Schedule 1, Special Concern
Date of Listing (yyyy-mm-dd): 2007-12-13 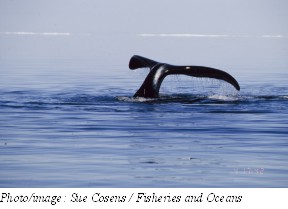 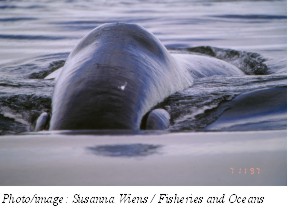 The Bowhead is a baleen whale that is mainly blue-black in color, with a very large head, great mouth and large lips. This species has the longest baleen (keratinous plates in place of teeth) of any living whale - up to 4 m in length. There are cream-colored blotches on the lower part of the jaw; white blotches on the belly; and a pale grey area on the tail. These whales can attain a length of 20 m; females are larger than males. The blubber on these whales is very thick and can measure up to 45 cm deep. At birth, a calf measures 4 m in length.

Bowheads have a nearly circumpolar distribution in the Northern Hemisphere, north of about 55° N and south of the permanent polar ice cap. However, several physical barriers, possibly in combination with oceanographic features such as temperature variations and current patterns, and competition with other whales for food or space, divide the total Bowhead population into four or five separate stocks. In Canada, the Bowhead Whale was historically found in the western Arctic, in the area of the Beaufort Sea, and in the eastern Arctic in the areas of Davis Strait, Baffin Bay and Hudson Bay. Today the western population of the Bowhead is found in the Beaufort Sea / Arctic Ocean area, primarily along the south and west coasts of Banks Island, in the Amundsen Gulf, near the Baillie Islands, and along western Tuktoyaktuk Peninsula. In the Eastern Arctic, Bowheads are present off southeastern Baffin Island and towards the Greenland side of Davis Strait during the winter and early spring; as the ice breaks up some move westward to northwest of Baffin Island and some move along the east coast of Baffin Island. There are also Bowheads in Hudson Strait from fall to spring, and in the waters between northwestern Hudson Bay and northern Foxe Basin during the summer. The International Whaling Commission's 1991 estimate of the size of the western population of the Bowhead Whale was 7500 whales, compared with an estimated 14,000-20,000 whales prior to commercial whaling. The Eastern Arctic stock is even more seriously depleted: only about 250 whales remained in the Baffin Island area in 1991, compared with at least 11,000 in the early 1800s. The number of Bowheads in the Hudson Bay area is thought to have been much less in 1991 than in 1860, when at least 500-600 whales summered there. Throughout the range of the species, the total population in 1991 was probably less than 10,000 whales, or about 15% of the pre-whaling abundance.

The Bowhead Whale inhabits Arctic waters, and prefers the environments of bays, straits and estuaries. It is always found near the ice edge, migrating north and south as the ice retreats or expands.

Very little is known about the reproduction of the Bowhead whale. It is thought that Bowheads give birth every three or more years, that effective mating takes place mainly in late winter, and that most calves are born in the spring. Bowheads are slow swimmers, which made them more vulnerable to hunting in the days before engine-driven boats and explosive projectiles. Feeding Bowheads commonly dive for 30 minutes, with dives separated by short periods spent near the surface, blowing air. At other times they are very active on the surface, slapping the water with their flippers, raising their flukes, and leaping high to fall back with a large splash. Bowheads are among the more vocal of baleen whales. Groups of up to 15 individuals, scattered over an area of 10-20 sq.km, probably maintain acoustic contact with one another during migration. They may also use the reverberations of their calls off the undersides of an ice floe to help them judge its dimensions. Within Bowhead populations, the smaller sub-adults appear to feed separately from adults during the summer months, preferring to remain closer to shore. Bowheads feed almost entirely on small invertebrate animals that occur in dense swarms, concentrating on organisms with very high energy content, such as copepods and euphausiids. Bowheads avoid or escape predation from Killer Whales either by sheltering in an ice-infested area, since they are much more maneuverable around heavy ice than Killer Whales are, or by heading for shallow water.

The severe depletion of the Bowhead stock by whalers is the main reason why this species is now endangered throughout the world. These whales are still harvested in Alaska. It is possible that climatic factors which influence ice conditions may also affect both the survival and the distribution of Bowhead Whales. Offshore developments in the Beaufort Sea may be an additional problem: both the traffic and the noise associated with such developments can adversely affect whale populations.

In Canada, the Cetacean Protection Regulations of 1982 protect the Bowhead whale; the killing of Bowhead whales without a license has been prohibited in Canada since 1979. An exemption makes it possible for aboriginal peoples to continue hunting the Bowhead, but this hunt is subject to quotas. Internationally, the International Whaling Commission regulates the hunting of Bowhead Whales through the establishment of quotas.

In the United States, the Bowhead whale is listed as an endangered species and protected under the U.S. Endangered Species Act.