Scientific Name: Marmota vancouverensis
Taxonomy Group: Mammals
COSEWIC Range: British Columbia
COSEWIC Assessment Date and Status Change: May 2019
COSEWIC Status: Endangered
COSEWIC Status Criteria: B2ab(v); C2a(i); D1; E
COSEWIC Reason for Designation: This endemic species is found only on Vancouver Island, British Columbia. Since the last assessment in 2008, the species has demonstrated a rapid population increase and then a subsequent decline; there are currently an estimated 88–101 mature animals in the wild. Ongoing predation remains high and there are potential threats from inbreeding and climate change. A successful captive-breeding program and resulting population supplementation has been reduced. A population viability analysis suggests that there is a high probability of extinction if there are extended periods of low adult survival, as observed during previous and most recent declines, and there are relatively few captive-bred animals introduced into the extant wild colonies.
COSEWIC History of Status Designation: Designated Endangered in April 1978. Status re-examined and confirmed Endangered in April 1997, May 2000, April 2008, and May 2019.
SARA Status: Schedule 1, Endangered
Date of Listing (yyyy-mm-dd): 2003-06-05 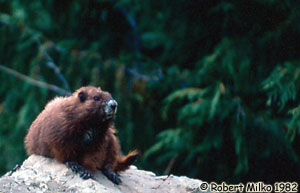 The Vancouver Island marmot is endemic to Vancouver Island, British Columbia, Canada. Vancouver Island marmots apparently suffered a severe range contraction over the last several decades, although records are insufficient to elucidate when or why this occurred. Annual population surveys since 1979 indicate that marmot numbers at least doubled during the 1980s, with most of this increase occurring in new habitats created by logging of old-growth forests. A minimum of 235 marmots were counted in 1984, but it is likely that the population numbered 300-350 at this time, with most of it in man-made habitats. The population declined precipitously during the 1990s, with only ~70 individuals remaining in the wild by 1997. In 2007 there were about 50 wild-born marmots in the wild, plus a few dozen released marmots (not included in this assessment) and over 100 captive marmots, which are also not included in this assessment. (Updated 2017/05/25)

The natural habitat of Vancouver Island marmots consists of sub-alpine meadows, usually at 900-1500 metres above sea level. Such meadows are believed to have been created and maintained by avalanches, snow-creep or fire, or a combination of processes. Patches of natural habitat on Vancouver Island tend to be both smaller and located father apart than those occupied by marmots in the B.C. mainland or the Olympic peninsula. Vancouver Island marmots also use man-made habitats. Numerous colonization events occurred in habitats created by clearcut logging of high elevation forests, mining, and ski-run developments. (Updated 2017/05/25)

M. vancouverensis is fossorial, herbivorous and hibernates, generally from early October through late April. Females may breed at age two, but most do not breed until age 3 or 4, producing litters of 3-4 pups every two years on average. Both sexes disperse, typically at age two. The maximum observed age is 10 years in the wild, 14 years in captivity. (Updated 2017/05/25)

The natural habitat of Vancouver Island marmots is limited. Sub-alpine meadows are small (1-10 ha) and occur infrequently in the otherwise forested landscape. Recent pollen analysis suggests that marmot habitats were much more extensive several thousand years ago. Palaeontological and archaeological records of marmots are found well outside of their historical extent of occurrence. Habitat created by logging is only temporary as forest regeneration makes conditions unsuitable for marmots. All 10 colonies found in clearcuts during the 1980s and 1990s became extinct by 2000. The median colony longevity in clearcuts was 10 years (range = 5-19 years), which is about 2-3 marmot generations. The major current threat to Vancouver Island marmots is predation. At least 80% of marmot mortality since 1992 was attributable to predation, largely by wolves (Canis lupis), cougars (Puma concolor) and golden eagles (Aquila chrysaetos). Annual survival rates have declined since the 1980s, losses at individual colonies were often dramatic within single years, and colony-specific survival rates were spatially correlated. Given the small size of the current wild population, other threats include loss of genetic variation, stochastic demographic or weather effects, and inability to find a mate. (Updated 2017/05/25)

Summary of Progress to Date Research and monitoring activities over the last 15 years have led to a solid understanding of the ecology, distribution, and limiting factors for the Vancouver Island Marmot in the wild. In the summer of 2004, the number of marmots in captivity and the wild topped 120, with the birth of 26 pups in all four breeding facilities. However, the Vancouver Island Marmot remains one of the most endangered species in Canada, with only 30 individuals existing in the wild. The Marmot Recovery Foundation, a public registered charity established in 1998, continues to make progress in fund-raising and enhancing public awareness, and as a result public support for Vancouver Island Marmot recovery is increasing. Summary of Research/Monitoring Activities Ongoing population monitoring studies, which began in the early 1990s, have led to a good understanding of population sizes and trends for the Vancouver Island Marmot. Results from more than 10-years of radio-telemetry studies indicate that the long-term survival of marmots is reduced in clear-cut areas, and that predation is an important mortality factor. Furthermore, a metapopulation study indicated that marmots do not colonize clear-cuts in proportion to their availability, but rather the clear-cuts act as a trap by diverting marmots to then settle nearby clear-cut areas instead of dispersing to their natural habitat. Other research has focused on collecting blood and fecal matter to test for Yersina and other potential pathogens that may be significantly contributing to Vancouver Island Marmot mortality. Reintroduction and captive-breeding methods, critical to the recovery of the Vancouver Island Marmot, continue to be developed and improved. A habitat suitability study, conducted in 1995, evaluated eight potential release sites and found that while all eight sites met the minimum criteria for the Vancouver Island Marmot, only one site rated as having “high potential”. Summary of Recovery Activities Captive breeding is currently underway at four facilities including the Toronto and Calgary zoos, a private breeding centre in Langley, British Columbia, and the Mount Washington breeding facility on Vancouver Island. The first reintroduction into natural sub-alpine habitat was unsuccessful: three of the four released animals were killed by predators, and the fourth was taken back into captivity. In the summer of 2004, nine more captive-bred animals were released: one was killed by a golden eagle, but the other eight survived and are currently in hibernation. To help ensure the survival of the reintroduced marmots, experimental non-lethal methods of preventing predator attacks, including the use of human shepherds, fencing and netting, have also been introduced. The core area of Vancouver Island Marmot habitat has been successfully protected within the Green-Haley reserve. http://www.marmots.org/