Scientific Name: Mustela nigripes
Taxonomy Group: Mammals
COSEWIC Range: Alberta, Saskatchewan
COSEWIC Assessment Date and Status Change: December 2021
COSEWIC Status: Extirpated
COSEWIC Status Criteria:
COSEWIC Reason for Designation: This is the only ferret species native to North America. Disease and the persecution of its primary prey, Black-tailed Prairie Dog, resulted in the extirpation of ferret from Canada. Captive-bred ferrets were released from 2009 to 2012 in Grasslands National Park, Saskatchewan. Prior to those efforts, this species was last observed in 1937. Insufficient prey resulted in suspension of the release program in 2013, and intensive monitoring has revealed no observations of ferret since then. Although the species is still held in captivity, it no longer occurs in the wild in Canada.
COSEWIC History of Status Designation: Extirpated by 1974. Designated Extirpated in April 1978. Status re-examined and confirmed in May 2000, April 2009, and December 2021.
SARA Status: Schedule 1, Extirpated
Date of Listing (yyyy-mm-dd): 2003-06-05 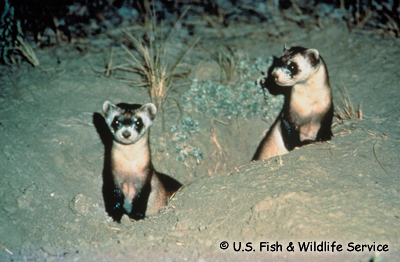 The Black-footed Ferret is a mink-sized, buff-coloured weasel with a short furry tail and oval protruding ears. Its fur is actually white, but the brown ends of the long hairs on the back give the animal an over-all creamy appearance. A dark chocolate band crosses the ferret's eyes, cheeks and feet; its legs and the last third of its tail are also dark brown. Long hairs on its feet hide the claws, and there is fur on the pads of the feet. The Black-footed Ferret's winter fur is shorter, but glossy and silky. The mean length of an adult male is 533 mm, and its mean weight is 585 g; females are approximately 10% smaller than males.

This species is very rare in Canada, and has probably been extirpated. Black-footed Ferrets were found in the western Prairies, to the south of Calgary, Alberta, and south of Regina, Saskatchewan. They are still found in the central part of the United States, adjacent to the Canadian Prairies. In 1997, there were 12 males and 18 females in the Metro Toronto Zoo's captive breeding colony.

Black-footed Ferrets inhabit short grass prairie. They are heavily dependent on Black-tailed Prairie Dogs as their main source of food. The habitat of the two is almost identical.

There is no information available on the biology of the Black-footed Ferret.

There is only a very small area where the specialized prey of the Black-footed Ferret are found in great numbers; this effectively limits the territory of the ferret.