Scientific Name: Vulpes velox
Taxonomy Group: Mammals
COSEWIC Range: Alberta, Saskatchewan
COSEWIC Assessment Date and Status Change: May 2021
COSEWIC Status: Threatened
COSEWIC Status Criteria: D1
COSEWIC Reason for Designation: This small prairie canid was extirpated from Canada in the 1930s. Following reintroduction programs initiated in 1983, it has re-established in southern Alberta and Saskatchewan as well as in Northern Montana. Regular monitoring suggests that the population reached a peak in 2005 but had subsequently declined when surveyed again in 2014/15. The reason for the decline is unknown but suspected to be related to severe winter conditions in 2010/11. Occupancy surveys in 2015 and 2018 suggest the population has remained stable since 2010/11. The species persists at very low numbers. Threats include accidental or intentional poisoning, disease, habitat loss, habitat fragmentation, and severe winters.
COSEWIC History of Status Designation: Last seen in Saskatchewan in 1928. Designated Extirpated in April 1978. Status re-examined and designated Endangered in April 1998 after successful re-introductions. Status re-examined and confirmed in May 2000. Status re-examined and designated Threatened in November 2009. Status re-examined and confirmed in May 2021.
SARA Status: Schedule 1, Threatened
Date of Listing (yyyy-mm-dd): 2003-06-05 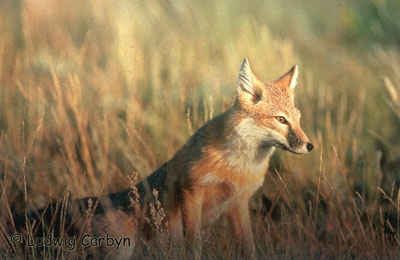 The Swift Fox is smaller and more slender than the Red Fox, and is lighter in colour. It is buffy-yellow with a black tip on its bushy tail. Its ears are relatively large and pointed. The fur grows in thicker towards the end of the summer. The Swift Fox measures approximately 80 cm in length, of which its tail makes up about 28 cm, and stands about 30 cm high at the shoulder. On average, the male fox weighs 2.45 kg and the female weighs 2.25 kg.

The Swift Fox was once found in dry prairie habitat from the southern Canadian prairie to Texas, but the species began to decline early this century. The last Canadian specimen was captured in Govenlock, Saskatchewan in 1928. The Swift Fox has made a comeback in much of its U.S. range and is being reintroduced in Canada. Captive breeding of the Swift Fox in Canada began in 1973 through a privately-run program. This program expanded into an intensive reintroduction project involving federal agencies, academia, and non-government organizations. Between 1983 and 1997, 942 Swift Foxes were released in southern Alberta and Saskatchewan. Although the majority of the original stock of released foxes has perished, the reintroduction efforts have been successful, and small populations have become established in the southern Alberta/Saskatchewan border area (about 192 foxes in 1997) and in the Wood Mountain/Grasslands National Park Reserve region in Saskatchewan (about 87 foxes in 1997). In 1999, the status of the Swift Fox was downlisted from "extirpated" to "endangered". In 1999, there were an estimated 279 foxes in the wild, with the two wild populations remaining small.

Swift Foxes are mainly nocturnal. During the day they usually remain in the vicinity of the den. They often live in pairs, although they may not mate for life. Breeding usually occurs between January and March. The gestation period is about 50 days. Pups born in captivity in Canada are born from mid-April to mid-May. An average litter consists of 4 or 5 pups, though litters of from 1 to 8 pups are possible. The Swift Fox is named for its speed; individuals have been recorded running faster than 60 km/hr. Swift Foxes mostly eat mice, cottontail rabbits, and carrion (dead and decaying animals), although other small mammals, birds, insects, reptiles and amphibians are also taken as available.

The conversion of native prairie grasslands to farmland has reduced both the quantity and quality of habitat available to the Swift Fox over much of its former range. The Swift Fox is very vulnerable to shooting and trapping since it is not wary of humans, and poison used to kill coyotes has been detrimental to the species. Predation by coyotes, eagles, and Red-tailed and Rough-legged Hawks is a potential threat to the Swift Fox.

The Swift Fox is protected under the Canada National Parks Act where it occurs in Grasslands National Park. It is also protected by the Saskatchewan and Alberta Wildlife Acts. Under these Acts, it is prohibited to kill, harm, or harass this species.