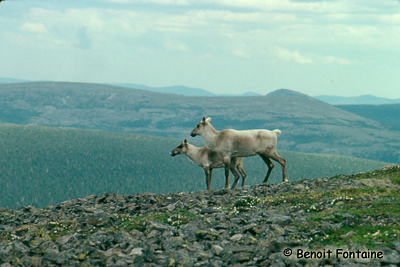 Woodland Caribou occur in five of the eight National Ecological Areas recognized by COSEWIC, and in all jurisdictions in Canada except Nova Scotia, New Brunswick, Prince Edward Island, and Nunavut. The Northern Mountain population is comprised of 36 local populations in Yukon, Northwest Territories, and northwestern British Columbia. The Southern Mountain population is made up of 26 local populations in British Columbia and 4 in Alberta. The Boreal population covers a huge area from the Mackenzie Mountains in the northwest to southern Labrador in the east and as far south as Lake Superior. In Newfoundland, the Woodland Caribou can be found in 15 natural and 22 introduced local populations — both on the main island and on islands offshore. The Atlantic-Gaspésie population in Quebec is the only caribou herd that remains south of the St. Lawrence River. It is largely restricted to the summits of Mont Albert and Mont Jacques-Cartier in Parc de la Gaspésie on the Gaspé Peninsula in Quebec. The small, isolated Atlantic-Gaspésie population declined from an estimated 500 to 1000 individuals in the 1950s to about 200 in the 1970s. The population stabilized between 200 and 250 caribou through the 1990s, with an average of 20 to 25 per 100 km² in 1996. A report from 2001 however, indicates that the population may be declining.

In winter, Woodland Caribou use mature and old-growth coniferous forests that contain large quantities of terrestrial and arboreal (tree-inhabiting) lichens. These forests are generally associated with marshes, bogs, lakes, and rivers. In summer, the caribou occasionally feed in young stands, after fire or logging. The average interval for habitats to return to their pre-fire state ranges from 40 to 80 years in the southern boreal forest in Alberta and Saskatchewan to 200 to 350 years in British Columbia. Studies of the Woodland Caribou Atlantic-Gaspésie population revealed that mature fir and White Spruce cover in the subalpine range was important winter habitat, and that the tundra of Mont Albert and Mont Jacques-Cartier was part of their critical summer habitat.

The Woodland Caribou Atlantic-Gaspésie population is completely isolated from other caribou. Low population numbers make it vulnerable to catastrophic events and inbreeding depression (loss of vigour resulting from mating between closely related individuals). The amount of habitat is limited — when ice and snow conditions are extreme there is nowhere else to go to look for food. This population of Woodland Caribou is also threatened by predation (by coyotes and bears), human disturbance, fire, and climate change.

The Woodland Caribou, Atlantic-Gaspésie population, is protected under the federal Species at Risk Act (SARA). More information about SARA, including how it protects individual species, is available in the Species at Risk Act: A Guide.

The Woodland Caribou Atlantic-Gaspésie population is protected by the Quebec Act Respecting Threatened or Vulnerable Species. Under this Act it is prohibited to possess, trade or harm this species or disturb its habitat. This population occurs entirely within Gaspésie Provincial Park.