Scientific Name: Delphinapterus leucas
Taxonomy Group: Mammals
COSEWIC Range: Nunavut, Quebec, Newfoundland and Labrador, Arctic Ocean, Atlantic Ocean
COSEWIC Assessment Date and Status Change: November 2020
COSEWIC Status: Threatened
COSEWIC Status Criteria: A1bd
COSEWIC Reason for Designation: The population has declined substantially (about 50%) since 1974 (i.e., over the last 2 generations). The population is still hunted for subsistence, and is at low numbers (ca. 2,600 mature individuals). While harvests have been reduced and the decline in abundance seems to have been halted, current harvest levels are a concern as the primary factor limiting population growth. Noise from increased vessel traffic, particularly in the overwintering areas of Hudson Strait and the Labrador Sea, related in part to declines in ice cover due to climate change, is also a concern.
COSEWIC History of Status Designation: Designated Threatened in April 1988. Status re-examined and designated Endangered in May 2004. Status re-examined and designated Threatened in November 2020.
SARA Status: No schedule, No Status
Date of Listing (yyyy-mm-dd): 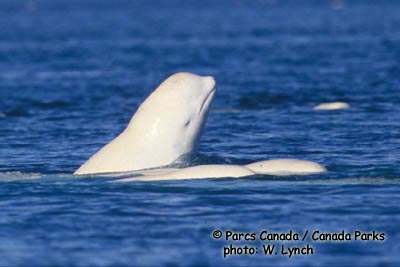 Males reach sexual maturity at 8 or 9 years, while females become sexually mature between 4 to 7 years of age. Belugas breed about every three years, between April and June. A female gives birth to one calf (about 1.5 m long) in July or August, after a gestation period of 14.5 months. Research suggests a low reproductive rate. Life expectancy is about 16 years, but Belugas in their late 20s have been recorded. The species feeds on almost 50 different invertebrate and fish species including squid, tube worms, caplin, Greenland and Atlantic Cod. Belugas are at the top of the food chain.

The Fisheries Act, Canada Shipping Act and Canadian Environmental Protection Act are principal legislative instruments governing the release of toxic substances into aquatic habitats. No legislation limits marine traffic effects on marine mammals. Marine mammal regulations of the Fisheries Act prohibit deliberate harassment. The Canadian Wildlife Act authorizes the federal Minister of the Environment to create National Wildlife Areas, including marine protected areas out to the 200 mile limit. The Canada Oceans Act may also permit the creation of protected areas. Guidelines established by the Department of Fisheries and Oceans identify critical sections of the species' summer range for the information of boaters. The Ungava and Eastern Hudson Bay populations have been protected by regulations since 1949. In 1980, a limit on catches was imposed in Pangnirtung to protect the Belugas inhabiting Cumberland Sound. An agreement between Kuujjuaq and Kangirsualujjuaq to completely stop the hunting of Belugas in the Marralik River was passed in 1986. At that time, quotas were also fixed for the communities of northern Quebec that hunt Belugas.