Scientific Name: Enhydra lutris
Taxonomy Group: Mammals
COSEWIC Range: British Columbia, Pacific Ocean
COSEWIC Assessment Date and Status Change: April 2007
COSEWIC Status: Special Concern
COSEWIC Status Criteria:
COSEWIC Reason for Designation: The species had been extirpated in British Columbia by the fur trade by the early 1900s, and was re-introduced from 1969-72. It has since repopulated 25-33% of its historic range in British Columbia, but is not yet clearly secure.  Numbers are small (<3,500) and require careful monitoring. Their susceptibility to oil and the proximity to major oil tanker routes make them particularly vulnerable to oil spills.
COSEWIC History of Status Designation: Designated Endangered in April 1978. Status re-examined and confirmed Endangered in April 1986. Status re-examined and designated Threatened in April 1996 and in May 2000. Status re-examined and designated Special Concern in April 2007.
SARA Status: Schedule 1, Special Concern
Date of Listing (yyyy-mm-dd): 2003-06-05 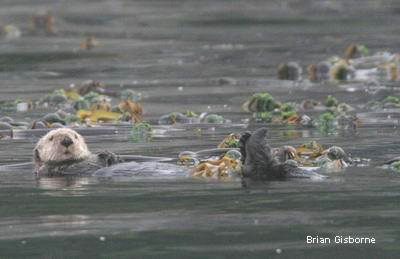 The Sea Otter is one of the smallest marine mammals. Males typically weigh about 45 kg, and reach 150 cm in length. The females are slightly smaller. Sea Otters have dense and soft fur that is their sole protection from the cold; it varies between rust, dark brown and black in colour. The fur is lighter on the otter's head, throat and chest. Sea Otters have a large and flat head; large teeth that can be used to crush shells; a blunt nose with long and stiff whiskers; black eyes and very small ears. The tail is short and stout. The front legs are small and fairly weak; although the back legs are also quite small, they are much stronger than the front legs, and are used as fins.

The Sea Otter formerly occurred across the Pacific Rim, from northern Japan to Baja California, Mexico. The worldwide population was 150,000 to 300,000 animals before commercial exploitation for fur in the 18th and 19th centuries caused extirpation of the species from much of its range. Fewer than 2000 animals remained by the early 1900s. Protective measures taken in 1911 came too late for British Columbia otters but saved the small California population and larger Alaskan one. The species now occupies about half its historic range, but is back up to 150,000 individuals worldwide. It occurs westward from the northern Gulf of Alaska through the Aleutian archipelago to Karnchatka Peninsula and Kuril archipelago. Large areas to the south of the Gulf of Alaska remain uninhabited by the species. Exceptions are in southeast Alaska, British Columbia and Washington, in areas where populations have been reintroduced. Eighty-nine otters were slowly reintroduced to British Columbia from 1969 to 1972; this population has grown by an average of 18.6 % per year, exceeding 1500 otters by 1995. They now occur mainly off Vancouver Island but are also found 125 km north near Goose Island.

The species inhabits shallow, coastal waters. It seldom ranges more than 1 -2 km from shore. Usually, it forages in depths of 30 m or less. All Sea Otters, particularly mothers with pups, seem to prefer areas with kelp canopies, but kelp is not an essential habitat requirement. Habitat use varies with weather and marine conditions. Off Vancouver Island, for example, otters move offshore during extended periods of calm, and they congregate in sheltered inshore areas during storms. The most suitable otter habitat is found on the outer west coast of Vancouver Island, on the mainland coast north of Vancouver Island, and around the Queen Charlotte Islands.

Most females reach sexual maturity at three years of age or older, while males mature at five to six years of age. Females bear a single pup (rarely two) at about one-year intervals. The pups are usually born in water. The number of large, dependent pups occuring off Vancouver Island in July suggests many pups are born from April to July. Pupping can, however, occur year round. The period of pup dependency varies but rarely exceeds one year. Sea Otters are non-migratory. Segregation is usually based on sex and age, with males and females tending to rest in different locations. The home ranges of males are much larger than those of females, especially females with pups. Bald Eagles, Killer Whales, sharks and humans are the main predators of Sea Otters. The otters feed mainly on shellfish and sea urchins, but are highly adaptable and often exploit seasonally abundant food resources. Behaviours of a Sea Otter include rolling onto its back when it has found food, and placing food on its chest to eat bit by bit. It twists around in seaweed to keep from drifting away. The Sea Otter also spends a lot of time cleaning its fur, since it depends on fur rather than blubber for protection from the cold.

Food limitation is a major cause of death, but oil spills are probably the greatest threat. Predators include Bald Eagles, Killer Whales and sharks. Bald Eagles are a significant cause of pup mortality. Human-related threats include environmental contamination, conflict with commercial fisheries and incidental takes.

The Sea Otter is protected by the Marine Mammal Regulations in the federal Fisheries Act. These regulations make it an offence to kill, harm, or harass marine mammals. It occurs in Pacific Rim National Park Reserve, where it is protected by the Canada National Parks Act. The species is listed as Threatened under the British Columbia Wildlife Act. Under this Act, it is prohibited to kill, capture, harass, or trade this species, or to destroy its habitat.

Summary of Progress to Date Once extirpated from Canada due to overhunting, Sea Otters were successfully reintroduced to a remote portion of the west coast of Vancouver Island from 1969 to 1972 by federal, provincial and state governments of Canada and the United States. The Checleset Bay Ecological Reserve was established in 1981 to provide sufficient habitat for this reintroduced population, which spread and grew at a rate of approximately 18% per year. By 1996 there were more than 1500 Sea Otters on this stretch of coastline and the COSEWIC status of the species was down-listed from Endangered to Threatened. Reintroduced populations in Washington State and south-eastern Alaska have also become established. The reintroduction of Sea Otters has had a dramatic impact on the nearshore community of species in BC, as has been documented during a decade of research. Sea Otters feed on sea urchins and other herbivorous invertebrates that graze intensively on seaweed. In BC, there does not appear to be any other non-human predator capable of controlling urchin populations to the same extent as this species. During the 100 or so years that Sea Otters were absent from their historical range, urchin populations increased, resulting in a decline of kelp forests along the rocky coastlines. With the return of Sea Otters to the area, urchin populations have decreased and kelp forests are reappearing. This has resulted in a change in the shoreline ecosystem. The kelp forests are increasing nearshore productivity by providing a source of food for many animals, creating habitat for fish, and slowing the water current so that invertebrates can settle. Coastal First Nation communities are participating in Sea Otter population assessments and educational activities through the federal Habitat Stewardship Program. Summary of Research/Monitoring Activities In 2001 and 2002, Fisheries and Oceans Canada began work to develop an effective survey method for on-going assessment of the Sea Otter population, and has since made aerial and boat-based counts throughout the range of this population. Biologists from the Nuu-cha-nulth Tribal Council have been making boat-based counts in parts of their traditional territory since 2002. Development of a habitat model to estimate Sea Otter carrying capacity in BC is underway. Samples of DNA, whiskers, blood and fur from live-captured Sea Otters are being analyzed and carcasses are collected for necropsy to determine and monitor the health status of Canadian Sea Otters. Summary of Recovery ActivitiesIn 2002, the Nuu-cha-nulth Tribal Council developed and presented workshops to inform their community members about the biology and ecology of the Sea Otter and discuss conflicting views of this species’ role in the ecosystem. Also in 2002, Johnstone Strait Marine Mammal Interpretive Society created a museum in Telegraph Cove, BC focusing on local marine mammals, including Sea Otters. In 2004 and 2005, youth forums were conducted focusing specifically on nearshore ecology and Sea Otter recovery, where students developed personal action plans to take back to their hometowns. Development of a Sea Otter Oil Spill Response Plan working document was supported by a grant from the Nestucca Trust Fund to the Biodiversity Branch, BC Ministry of Water, Land and Air Protection. To further oil spill response planning for Canadian Sea Otters, a Sea Otter Oil Spill Recovery Implementation Group was formed in 2005 and the Vancouver Aquarium, West Coast Aquatic Management Association, and the Nuu-chah-nulth and Heiltsuk First Nations conducted oil spill and wildlife response training under the federal Habitat Stewardship and Aboriginal Capacity Building Programs. URLs National Recovery Strategy for the Sea Otter in Canada:http://www.pac.dfo-mpo.gc.ca/comm/pages/consultations/sea-otters/documents/04SeaOtter_RS.doc Department of Fisheries and Oceans: Sea Otter Recovery Action Plan Workshops:http://www.pac.dfo-mpo.gc.ca/comm/pages/consultations/sea-otters/default_e.htm Vancouver Aquarium: Sea Otters: Species at Risk:http://www.vanaqua.org/mmrr/seaotters/ Department of Fisheries and Oceans Canada: Environmental Response:http://www.pacific.ccg-gcc.gc.ca/er/index_e.htm