This small mammal is restricted to a relatively small population in southern Saskatchewan.  The change in status from Special Concern to Threatened is based mainly on the threat of increased drought, and sylvatic plague, both of which would be expected to cause significant population declines if they occur frequently.  Drought events are predicted to increase in frequency due to a changing climate.  Sylvatic plague was first recorded in 2010.  Although the Canadian population is in a protected area, it exists within a small area, and is isolated from other populations, all of which are located in the United States.
COSEWIC History of Status Designation: Designated Special Concern in April 1978. Status re-examined and confirmed in April 1988, April 1999 and November 2000. Status re-examined and designated Threatened in November 2011.
SARA Status: Schedule 1, Threatened
Date of Listing (yyyy-mm-dd): 2003-06-05 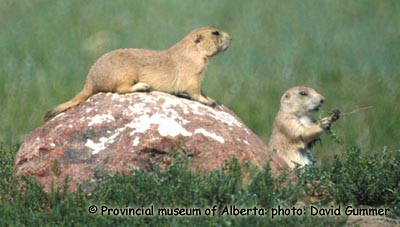 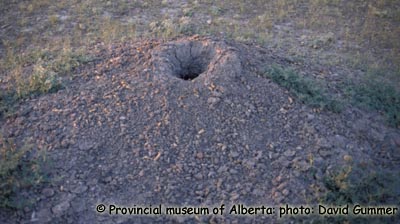 The Black-tailed Prairie Dog is a diurnal, burrow-dwelling squirrel that lives in colonies. Individuals are 35-42 cm in body length, have short legs, tails with a black tip, small ears and brown to reddish-brown fur with an off-white underbelly. Prairie dogs are an important component of native short and mixed-grass prairie ecosystems and provide breeding habitat for two endangered species, the Mountain Plover and Burrowing Owl, as well as being an important prey for several rare and endangered species such as the reintroduced Black-footed Ferret. The Canadian population of the Black-tailed Prairie Dog is considered a distinct local population because it is at the northernmost point of the species’ range and is isolated from populations in the United States. (Updated 2017/07/21)

The Black-tailed Prairie Dog occurs in the short- and mixed-grass prairies of North America from northern Mexico to Saskatchewan, Canada. The species is extirpated from east Texas north to eastern North Dakota, and where it remains the actual area occupied is small and colonies are mainly small and isolated. In Canada, the population is located in the lower Frenchman River valley and adjacent areas in southwestern Saskatchewan. The Canadian population exists as 18 colonies in close proximity (12km² ); interchange between colonies is likely and the population is considered a single designatable unit. A second population, near Edmonton, Alberta, derived from escaped captives, is not discussed, as per COSEWIC guidelines. (Updated 2017/07/21)

The Black-tailed Prairie Dog lives in grasslands with soils that support extensive burrow systems. The spatial extent of prairie dog colonies tends to be stable in the absence of sylvatic plague outbreaks, and can occupy the same area for many years. Colonies are characterized by short vegetation and numerous mounds of soil (often 30-60 cm high) heaped around each burrow entrance. (Updated 2017/07/21)

Black-tailed Prairie Dogs are herbivorous, predominantly eating grasses. They live in family groups (coteries) composed of one male and 2-4 females, often with 1-2 yearlings also present. Coteries are aggregated into colonies. Animals older than 2 years mate in March-April, with 2-6 young born in May. Maximum recorded age is 5yr (males) and 8yr (females). Most dispersal is by yearling males. Canadian Black-tailed Prairie Dogs hibernate for 4 months over winter. (Updated 2017/07/21)

The Canadian population exists as a single location because two threats, epizootic sylvatic plague and drought may impact the entire population in a short period. In 2010, a single Black-tailed Prairie Dog in Canada was found dead from sylvatic plague and plague was suspected in the loss of a small (4 ha) colony more than 10 km away. In 2011, pups were recorded where the plague had been found, suggesting the plague was not an epizootic event because numerous neighbouring colonies were not extirpated. Drought limits food production and likely explains fluctuating population levels. Drought is a natural event but frequency of drought is predicted to increase. The recent (2009) reintroduction of Black-footed Ferrets has exposed prairie dogs to a predator they have not experienced in 70 years, and the resilience of the Canadian population to both sylvatic plague and ferret predation is unclear. The impact of Black-footed Ferrets on Black-tailed Prairie Dogs is being monitored but no results were available during the writing of this report. Most other threats are minor, mainly because activities within the protected regulation zone containing the colonies are restricted. An expansion of the population beyond the current zone would be required for the species to recover to the point of not being listed by COSEWIC, but numerous threats outside the zone suggest expansion is unlikely. (Updated 2017/07/21)