Scientific Name: Urocyon cinereoargenteus
Taxonomy Group: Mammals
COSEWIC Range: Ontario
COSEWIC Assessment Date and Status Change: November 2015
COSEWIC Status: Threatened
COSEWIC Status Criteria: Met criterion for Endangered, D1, but designated Threatened, D1, due to rescue effect.
COSEWIC Reason for Designation: This southern fox is apparently expanding northward, but very few mature, breeding individuals are known to live in Canada. These animals are restricted to two sub-populations; one in the Rainy River – Thunder Bay region, which has a strong rescue effect, but rescue effect for the other, Pelee Island, is uncertain. Sub-population threats include incidental trapping and roadkill. Animals have been recorded in Manitoba and Quebec, but breeding is not evident at this time. Recent records in New Brunswick likely represent dispersing non-breeding animals.
COSEWIC History of Status Designation: Designated Special Concern in April 1979. Status re-examined and designated Threatened in May 2002 and November 2015.
SARA Status: Schedule 1, Threatened
Date of Listing (yyyy-mm-dd): 2005-01-12 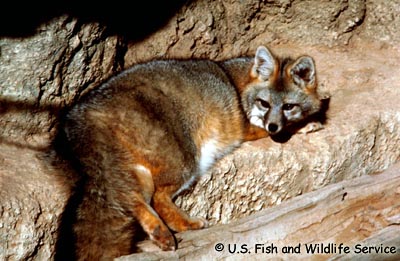 The Gray Fox (Urocyon cinereoargenteus) has a typical fox-like appearance but the pelage is a grizzled grey colour, with reddish regions on the neck, sides, and legs. There is a prominent black stripe running the length of the back down to the tip of the tail. The Gray Fox is significant in the phylogeny of canids because it is considered to be the basal member of the Canid family. It is also the most arboreal of canids, and can partially rotate its ankle bones to facilitate descending trees. (Updated 2017/01/17)

The Gray Fox is generally found from south-central Canada to northern parts of South America and is expanding its range in the United States northward and eastward. They were present historically in southern Ontario but currently are likely breeding in two regions in Canada: Rainy River-Thunder Bay (hereafter; ‘Northwestern Ontario’), and Pelee Island, Ontario. In this report, the Gray Fox in southeastern Manitoba, Quebec, and New Brunswick are considered to be extralimital or dispersers/visitors or, more appropriately, ‘occasional’ animals that have dispersed from adjacent populations in the United States and have not likely established breeding populations in these parts of Canada. (Updated 2017/01/17)

The Gray Fox’s distribution is closely associated with deciduous forest. Gray Foxes den in many different kinds of substrates, usually located in dense brush close to a water source. Gray Foxes are considered habitat generalists and are partially tolerant of human disturbances, although they are generally more secretive than Red Fox (Vulpes vulpes), and so are seen less often. (Updated 2017/01/17)

Gray Fox are the most omnivorous of the North American canids and will consume vegetable matter, such as fruit, year-round. Gray Foxes in Canada are thought to breed from mid-February to mid-March, as they do in the northeastern United States. Most female Gray Foxes breed in their first year and have one litter of 3 - 4 kits per year. Gray Foxes are typically nocturnal or crepuscular. The basic social unit consists of an adult male and female and their offspring, and this group maintains a home range. The adult sex ratio is usually 1:1 and Gray Fox are assumed to be monogamous. (Updated 2017/01/17)

Mortality from trapping likely is preventing the establishment of breeding sub-populations in much of the Canadian range outside Pelee Island. The most important factor affecting Gray Fox populations in the United States is trapping. The effect of harvest in Canada is unknown but most records in most sub-populations derive from incidental trapping. Because of the small population size, any significant mortality factor, such as high Coyote predation and diseases (including canine distemper and rabies), could become significant limiting factors. In the two sub-populations with evidence of breeding, but mainly in the Northwestern Ontario sub-population, the likely threats are mortality from trapping, and roadkill. The overall threat score was high. (Updated 2017/01/17)