Scientific Name: Phoca vitulina mellonae
Other/Previous Names: Harbour Seal (Lac des Loups Marins landlocked population)
Taxonomy Group: Mammals
COSEWIC Range: Quebec
COSEWIC Assessment Date and Status Change: April 2018
COSEWIC Status: Endangered
COSEWIC Status Criteria: D1
COSEWIC Reason for Designation: This land-locked subspecies is endemic to Québec and may number less than 100 individuals. It inhabits a small series of lakes in northern Québec and is the only sub-species to live entirely in fresh water. Climate change could cause pervasive changes to habitat and could increase predation pressure on the population. The population was and is being harvested by the Cree at low, but unknown, rates. Eventual hydro-electric development and mining exploration outside of the identified critical habitat could potentially alter the habitat.
COSEWIC History of Status Designation: Designated Special Concern in April 1996. Status re-examined and designated Endangered in November 2007 and April 2018.
SARA Status: Schedule 1, Endangered
Date of Listing (yyyy-mm-dd): 2017-04-13 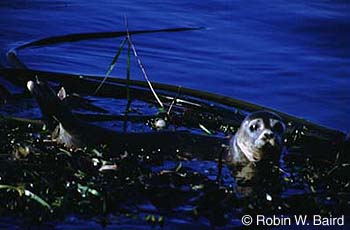 The subspecies occurs in Lacs des Loups Marins (Upper and Lower Seal Lakes), an area situated 160 km east of Hudson Bay on the Ungava peninsula of northern Quebec. The seals have also been reported in surrounding lakes and rivers, but four individuals surveyed in the fall of 1995 remained within the immediate vicinity of Lower Seals Lake throughout the entire survey period. The population has been comprised of 100 to 600 animals since 1957. The most recent estimate is 100 animals. It is believed that the Lacs des Loups Marins population was established between 3000 and 8000 years ago, during a time of marine submergence.

The seals feed exclusively in freshwater, consuming mostly fish. They rely on strong currents to free some areas of ice. They also depend on ice fissures and on air pockets partly created by the shoreline's complex geometry.

Pupping occurs from mid-April to mid-May. This time period is substantially in advance of other Harbour Seals occuring at a similar latitude. Pupping likely occurs in under-ice shelters. The subspecies probably winters in the larger bodies of water (Lac des Loups Marins, Lac Bourdel and Petit Lac des Loups Marins). It may disperse to outlying smaller bodies of water when the ice melts.

Some populations of Harbour Seals have been extirpated or drastically reduced by human activity. Hunting is one cause. Entanglement in fishing gear is another.

The Harbour Seal Lacs des Loups Marins subspecies is protected under the federal Species at Risk Act (SARA). More information about SARA, including how it protects individual species, is available in the Species at Risk Act: A Guide.

Marine mammal regulations pursuant to the 1867 Fisheries Act could provide the species with legal protection.