Scientific Name: Megaptera novaeangliae
Taxonomy Group: Mammals
COSEWIC Range: Arctic Ocean, Atlantic Ocean
COSEWIC Assessment Date and Status Change: May 2003
COSEWIC Status: Not at Risk
COSEWIC Status Criteria:
COSEWIC Reason for Designation: Although heavily reduced by whaling, this well-studied population seems to have regrown to at least a substantial proportion of its pre-whaling size. The population does face threats (including entanglement in fishing gear, habitat degradation on breeding grounds, possible resumption of commercial whaling), but neither the North Atlantic population, nor any of its feeding sub-populations, is at risk from current activity levels, or levels that may reasonably be foreseen in the next few years.
COSEWIC History of Status Designation: The "Western North Atlantic and North Pacific populations" were given a single designation of Threatened in April 1982. Split into two populations in April 1985 (Western North Atlantic population and North Pacific population). Western North Atlantic population designated Special Concern in April 1985. Status re-examined and designated Not at Risk in May 2003.
SARA Status: Schedule 3, Special Concern - (SARA Schedule 1 provisions do not apply)
Date of Listing (yyyy-mm-dd): 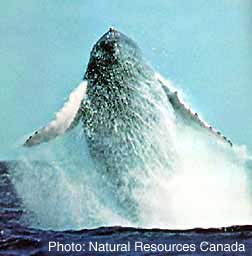 The Humpback Whale is distinguished by long jagged fins, which can measure up to a third of the whale's body length. The whale has a black back and white belly. A small dorsal fin is located near the centre of the back. Deep grooves in the Humpback's throat permit it to open its mouth wide to swallow large amounts of prey at one time. Small bumps are found on the head and neck. Adults measure between 14 and 19 m, and weigh between 34 000 and 45 000 kg. The tail of a male adult measures about 80 cm in width.

In the Atlantic, Humpback Whales occur from the West Indies to Greenland. In eastern Canada, in the summer, they are common off the east and south coasts of Newfoundland, off southeastern Labrador, on the edges of the Grand Banks, and in the Gulf of St Lawrence. The Northwest Atlantic population is estimated at about 4000 Humpbacks. The North Pacific population is estimated as being composed of approximately 2000 whales. Humpback Whales form distinct populations and live close to coastlines. During the fall, they migrate southward to winter and breed in tropical waters; during the spring, they return to northern feeding grounds for the summer.

Humpback Whales generally follow the coastlines and take advantage of seasonal currents during their migrations. During the breeding season, they prefer water temperatures between 24 and 28 °C; and areas offering protection against prevailing winds, that have flat oceans beds at a depth of 15 to 60 m. Summer movements of the whales are linked to prey availability.

Humpback Whales reach sexual maturity at 9 years of age. A female gives birth to one calf, between January and April. The gestation period is of approximately one year. Normally, females give birth every two years.

Before protection of Humpback Whales was instituted in 1960, overexploitation had greatly reduced their numbers. Ongoing exploitation of the Humpbacks' prey is also having negative impacts on the species; the depletion of the capelin stocks is of particular concern. Since large trawlers became a part of commercial fishing operations in the 1970s, Humpbacks have been dying in fishing nets. Oil pollution is also a threat to this species.