This relatively large but rare bat is restricted to the semi-arid shrub-steppe of the southern Okanagan Valley, BC at the northern limit of its global distribution. Although the number of known individuals has increased since the last assessment, this can be attributed to increased survey effort and the enhanced knowledge of roost sites. Nevertheless, the population is still thought to be small (fewer than 1000 individuals), cliffs available for roosting are very limited and foraging habitat is in continuing decline.
COSEWIC History of Status Designation: Designated Special Concern in April 1988. Status re-examined and designated Threatened in May 2000. Status re-examined and confirmed in November 2010.
SARA Status: Schedule 1, Threatened
Date of Listing (yyyy-mm-dd): 2003-06-05 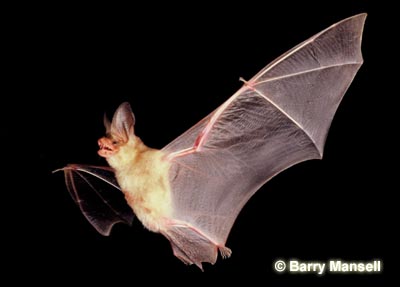 The Pallid Bat is a large bat with slate grey wings and a pale abdomen. It is characterized by large tan-coloured ears, large (for a bat) eyes and short fur which fades from a pale yellowish-brown colour dorsally to cream ventrally. The nostrils of this bat are located on a raised ridge, and there are two glandular swellings (which emit a skunk like odour) behind them. The annual moult occurs between May and August. Females measure 107 to 130 mm and weigh 24 to 35 g. They are a little larger than the males.

The Pallid Bat is a southwestern species that is found from northern Mexico to the edge of the Canada/United States border. In Canada, Pallid Bats are found only in an area of no more than 500 square kilometres of the Okanagan Valley in southern British Columbia. The size of the Canadian population is unknown but it likely is quite small. Recent evidence indicates that the species breeds in Canada although it remains uncertain if it winters here.

Pallid bats inhabit arid and semi-arid regions of western north America. They prefer open, sparsely vegetated terrain in deserts, sagebrush, dry grasslands and cultivated fields, but they also occur in coniferous forest. For roosting during the day and for breeding they require crevices in cliffs and rock faces, which are not very common within their range. In Canada, the species appears to be restricted to the bottoms of valley at low elevations.

Female Pallid Bats reach sexual maturity during their first year, while males reach sexual maturity during their second year. Mating occurs between October and December; the females store the sperm in the uterus until ovulation occurs in the spring. The gestation period is approximately 9 weeks. Litters contain 1 to 3 young. At birth the young are hairless and blind; they are nursed by the mother, to whom they cling when she flies about in search of food. The young are ready to fly on their own when about seven weeks old. Pallid Bats are colonial during the breeding season. In the fall, individuals migrate to secluded shelters to hibernate for the winter. These nocturnal bats have an unusual foraging method: they swoop low over the ground in search of insects and other prey and spend at least some time on the ground pursuing prey such as scorpions. Their predators include owls, hawks, snakes and domestic cats.

The main limiting factors for Pallid Bats in Canada seem to be the harsh climate and naturally low availability of adequate habitat. The bats are threatened by continuing habitat loss from a rapidly increasing human population, urban expansion, recreational use, and agriculture (particularly fruit growing). Pesticides are also a threat especially in fruit-growing areas because these bats can be poisoned by contaminated insect prey, particularly agricultural pests upon which they are known to feed.

The Pallid Bat occurs in Vaseux-Bighorn National Wildlife Area and on First Nations land which are federal lands protected under SARA. It is also protected by the British Columbia Wildlife Act. Under this Act, it is prohibited to kill or poison any native terrestrial mammal without a permit.

Summary of Progress to Date Implementation of the Pallid Bat recovery strategy is part of the South Okanagan – Similkameen Conservation Program (SOSCP). A draft of the recovery strategy is being completed. Field research has identified habitats and behaviours that may be important to the conservation of the Pallid Bat. The acquisition of properties by the Nature Trust of British Columbia and the creation of protected areas by the provincial government are securing habitats that may be important to Pallid Bats in Canada. Summary of Research/Monitoring Actions Surveys and radio telemetry studies have improved estimates for the number of Pallid Bats in Canada and have contributed to our understanding of the reproductive biology and habitat use of the species. Habitat mapping is being refined in the Osoyoos area and the understanding of Pallid Bat habitat use is a priority for future research. Summary of Recovery Actions Outreach materials have been developed and provided to the SOSCP stewardship team. Work is continuing in the Osoyoos area to identify habitats important to Pallid Bats and this information is shared with the Stewardship and Acquisition Teams of the SOSCP. URLs Royal BC Museum: Pallid Bat: http://www.royalbcmuseum.bc.ca/end_species/species/pbat.html BC Lands in Trust: Pallid Bat: http://landtrustalliance.bc.ca/registry/code/species.php?species=34 South Okanagan – Similkameen Conservation Program: http://www.soscp.org/