Scientific Name: Balsamorhiza deltoidea
Taxonomy Group: Vascular Plants
COSEWIC Range: British Columbia
COSEWIC Assessment Date and Status Change: April 2009
COSEWIC Status: Endangered
COSEWIC Status Criteria: Met criteria for Threatened, A2ac; B1ab(ii,iii,iv,v)+2ab(ii,iii,iv,v), but designated Endangered, B1ab(ii,iii,iv,v)+2ab(ii,iii,iv,v), because 4 of the native populations may not be viable.
COSEWIC Reason for Designation: A showy perennial comprising only eight natural populations containing about 1600 mature plants. The largest population has declined greatly due to site development in recent years and accounts for most of the 35-40% decline in the total Canadian population. All populations experience continued habitat degradation from competition with invasive introduced plants. Four of the eight populations are also at risk of extirpation from stochastic events due to the presence of only one to several plants in each.
COSEWIC History of Status Designation: Designated in April 1996 as Endangered. Status re-examined and confirmed Endangered in May 2000 and in April 2009.
SARA Status: Schedule 1, Endangered
Date of Listing (yyyy-mm-dd): 2003-06-05 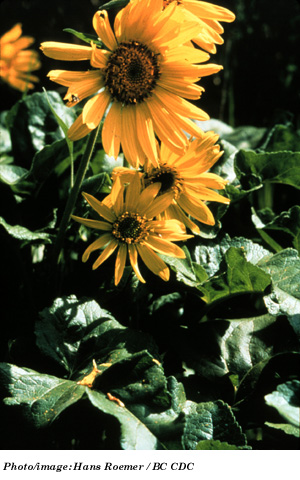 Deltoid Balsamroot is a perennial herb and member of the aster family. It comprises one or more unbranched stems up to 1 m tall. The leaves at the base are large and triangular, growing up to 50 cm long and 20 cm wide. The stem leaves are much smaller and somewhat narrower. The flowers are grouped together in a flower head, which resembles a single flower. Each stem bears a single flower head consisting of a disk of small yellow flowers without petals. The flower head is rimmed with a peripheral ring of larger, bright yellow ray flowers, each of which has a single long petal. The dry fruits, or achenes, are small and smooth and contain a single seed. Arrowleaf Balsamroot is the only other species in Canada that might be confused with Deltoid Balsamroot, but the ranges of the two species do not overlap.

Deltoid Balsamroot occurs from the southeast coast of Vancouver Island, south through Puget Sound in the state of Washington to the Willamette Valley of central Oregon, onwards into California, where it occurs both in the foothills of the Sierra Nevada mountains and dry coastal areas along the Pacific Ocean. In Canada, the species has been reported from at least 16, and perhaps as many as 20 coastal locations on the southeast side of Vancouver Island, from Campbell River to the vicinity of Victoria. By 2007, only 8 of the 16 confirmed populations were extant. In 2007, there were 1589 mature plants, i.e., that were large enough to flower, in the 8 known populations of Deltoid Balsamroot in British Columbia. Most Canadian populations appear to have been relatively stable since 1996. However, the largest population, the Campbell River population, has declined from a peak of approximately 1700 plants in 1992 to 345 plants in 2007. This is the result of the development of the site in 2003. The sharp decline in the Campbell River population accounts for most of the 35 to 40% decline in the total Canadian population since 1996. All populations are experiencing continued habitat degradation from competition with introduced invasive plants. Four of the eight populations comprise only one to several plants each, which puts them at risk of extirpation due to chance events.

In Canada, Deltoid Balsamroot usually occurs in meadows or woodlands dominated by Garry Oak and/or Douglas-fir. Shrubs are usually sparse, although invasive shrubs, such as Scotch Broom, are often present. The herb layer is well developed and is often dominated by invasive grasses. Summer droughts cause the herbaceous vegetation to die back in June and July. While Deltoid Balsamroot appears to require deep soil, rocks frequently outcrop near or within populations. The species prefers well-drained soil, generally moist in the spring, with the moisture level subsequently diminishing.

In Canada, the shoots begin to develop in April, and flowering peaks in May. Seeds probably germinate in early spring and most plants likely require several years to flower. The flowers are pollinated by insects, but seed production is low. In the largest Canadian population, a high proportion of Deltoid Balsamroot seeds produced each year do not develop to maturity, perhaps as a result of the rapid onset of drought conditions in June. Seed production is also limited by vertebrate grazing and by insects feeding in the flower heads. The achenes are shed as the plants begin to wither, usually in late June. The small dry fruits lack any structures to aid dispersal by wind, water or animals, so most seeds are probably dispersed over very short distances, not far from the parent plant. Summer droughts are probably a critical stressor, and plant adaptations to moisture stress undoubtedly play a key role in determining species competition. Mature Deltoid Balsamroot plants possess a long, deep taproot that stores moisture and nutrients.

The amount of potential habitat on southeast Vancouver Island and the adjacent offshore islands has declined greatly over the past century as suitable woodlands and maritime meadows have been destroyed during the development of land for residential and recreational use. The most expensive and sought-after properties are in coastal areas, where most Deltoid Balsamroot habitat is found. Today, the most direct and immediate threat to the species is habitat destruction, particularly at Campbell River, where a significant proportion of the habitat supporting the largest Canadian population of the species has been converted into parking lots and light industrial developments. Invasion by exotic plant species, which compete with Deltoid Balsamroot for light and nutrients, is a threat to several populations. Invasive shrubs, such as Scotch Broom, are being controlled in five of the eight extant populations. Canadian populations of Deltoid Balsamroot can be heavily affected by herbivory. Columbia Black-tail Deer and Eastern Cottontails may remove sufficient leaf material to cause a long-term decline in plant vigour. Insects could also cause substantial leaf loss in some populations. Trampling and flower picking are another threat to populations that occur along trails, as at Mount Tzuhalem, Thetis Lake, Beacon Hill Park and perhaps Campbell River. The population at Campbell River was fenced in 2007 to prevent it from being damaged by vehicles using the parking lot that encircles it. Trail maintenance activities, including regrading and mowing, pose a threat to the populations at Thetis Lake and Beacon Hill Park.

One very small population, comprising two plants, occurs in a national historic site managed by Parks Canada, so that they are on federal land protected by the Species at Risk Act (SARA). Deltoid Balsamroot is not protected by any provincial legislation in British Columbia. Three populations occur in parks managed by municipal or regional governments, where they would potentially receive some protection from habitat loss due to development activities.