This plant exists at low numbers in a dynamic and restricted habitat along the Saint John River in New Brunswick. Changes to river dynamics, land clearing of buffer trees, recreational activities, and the introduction of invasive species have resulted in continuing population decline at the existing sites.
COSEWIC History of Status Designation: Designated Endangered in April 1980. Status re-examined and confirmed Endangered in April 1998, May 2000, and May 2011.
SARA Status: Schedule 1, Endangered
Date of Listing (yyyy-mm-dd): 2003-06-05 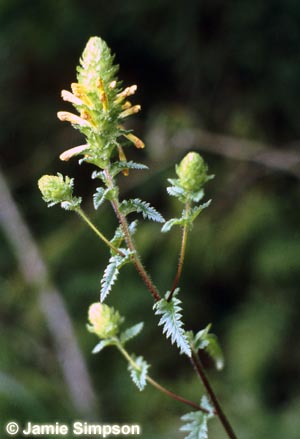 Furbish's Lousewort is a perennial herb that averages 75 cm in height. Usually the stem is simple, but there may be a few branches on the upper part of some stems. One of the main distinguishing features of this plant is the deeply incised leaflet, especially on the lower leaves.

Furbish's Lousewort grows on the bank of the St. John River in three areas of New Brunswick and at 18 sites in Maine. The habitat is different at each of the locations. In New Brunswick, the first area is a narrow bank of moist, well drained, sandy or gravelly calcareous soil. The plants grow within 7.6 m of the water and not more than 1 m in vertical distance above it. The plants are on a sloping, clean-cut line where mixed forest and river meet, and are shaded most of the day. Shrubs are present in small numbers, but do not clutter the shoreline. The second NB Furbish's Lousewort area is much more open and consequently more exposed to sunlight. Most of the plants are growing on lumps of earth that have been eroded from the edge of the forested bank and carried some distance toward the bed of the river. The soil here is more gravelly and there are numerous small boulders strewn about. In the third area, the plants are growing on the east bank of a railway cut through a hill, and are situated more than 0.4 km from the river. The soil is sandy-gravel, well drained, and not as moist as in the other two areas. The plants are in the shade for most of the day.

Furbish's Lousewort reproduces exclusively by seeds. In Canada, flowering occurs from the beginning of July to the end of August. The flowers of Furbish's Lousewort are pollinated by bumblebees. The seeds drop beneath the parent plant or close to it. The seedlings grow under or close to the parent plant, thus forming colonies around mature plants.

A large amount of Furbish's Lousewort habitat has been lost over the past 50 years and will likely continue to be lost. Nevertheless, there is ample potential habitat for the plant that it is not colonizing naturally. Garbage dumps, litter, gravel pit operations and forestry practices along the river banks are likely having an impact on habitat quality.

The Furbish's Lousewort is protected by New Brunswick's Endangered Species Act. Under this Act, it is prohibited to kill, harm, or collect this species, or to disturb its habitat.

Summary of Progress to Date A recovery team has been initiated for Furbish’s Lousewort. Summary of Research/Monitoring Activities A significant amount of research has been conducted on Furbish’s Lousewort in Maine, and the results of these studies are generally applicable to the Canadian populations. Monitoring of Canadian Furbish’s Lousewort populations has increased over the past five years, with an annual census conducted at most sites. From 2002 to 2003, the Nature Trust of New Brunswick partnered with the Atlantic Canada Conservation Data Centre to conduct surveys for rare plants, including Furbish’s Lousewort, along the Upper Saint John River. These surveys led to the discovery of two new populations of this species along the river. A 2004 survey of threats to shoreline plants between Grand Falls and Perth Andover found that the majority of the shoreline remains in exemplary quality, but that roads, trails, gravel pits, fields and lawns have compromised the ecological integrity of 42% of the shoreline. Summary of Recovery Activities In 1990, several not-for-profit organizations collaborated to create the George Stirret Nature Preserve, a protected area around the habitat of one population of Furbish’s Lousewort. Most Furbish’s Louseworts and other rare plants along the Upper St. Johns River occur on private lands; therefore, private landowner stewardship is vitally important. Having surveyed the river’s flora, the Nature Trust contacted landowners with rare plants and rare plant communities on their properties to encourage and support stewardship practices (e.g., limiting human traffic to designated trails, maintaining tree buffers along the water). This has resulted in 15 voluntary private landowner stewardship agreements. The Nature Trust maintains a web site with information about Furbish’s Lousewort and other rare flora of the Upper St. Johns River: www.naturetrust.nb.ca. URLshttp://www.naturetrust.nb.ca/