Scientific Name: Pycnanthemum incanum
Taxonomy Group: Vascular Plants
COSEWIC Range: Ontario
COSEWIC Assessment Date and Status Change: November 2011
COSEWIC Status: Endangered
COSEWIC Status Criteria: B1ab(iii,iv)+2ab(iii,iv)
COSEWIC Reason for Designation: This perennial plant has a historically small distribution in Canada, where it is known to occur in just two populations along the Hamilton bluffs in Ontario.  Its highly specific habitat, which is limited to a small shoreline area of the bluffs, makes this species especially vulnerable.  The main threats to its persistence are the encroachment of invasive species, the loss of habitat to erosion and fire suppression, which contributes to succession to unsuitable habitat types.
COSEWIC History of Status Designation: Designated Endangered in April 1986. Status re-examined and confirmed Endangered in April 1998, May 2000, and November 2011.
SARA Status: Schedule 1, Endangered
Date of Listing (yyyy-mm-dd): 2003-06-05 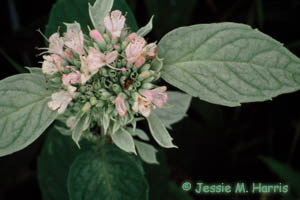 The Hoary Mountain Mint is a perennial herb. The stems, which rise from rhizomes, measure about 1 m in height. There are many hairs on the stems of this plant, and there are more hairs on the upper parts of the stems than on the lower parts. The oblong leaves have a few teeth on each side and are covered with dense fine white hairs. The upper leaves are green on the upper surface and white underneath, while the lower leaves are white on both sides. The heads of the flowers measure 1.5 to 3.5 cm in diameter; the flowers are white with purple spots. The plant has a distinctive and fragrant minty scent.

The Hoary Mountain Mint occurs in the United States from New England and southern Illinois south to South Carolina. In Canada, the species occurs only in southern Ontario. Initially there were two known extant locations, less than 2 km apart: Willow Point in Burlington, and Woodland Cemetery in Hamilton. The Willow Point colony consisted of 41 stems in 1984 and 48 stems in 1997. The Woodland Cemetery site had 39 stems in 1991, but only one stem remained in 1997. At a third site, which consisted of 3 plants with numerous stems in 1991, no Hoary Mountain Mint plants were found in 1997. A substantial new population was located in 2000, bringing the total of known extant locations to three, all found on the Burlington Bluffs in Hamilton and Burlington. The total number of plants in Ontario is roughly 600.

The Hoary Mountain Mint reproduces through seeds and through the division of the rhizome. It flowers between mid-July and mid-September.

In Canada, habitat destruction is the most serious threat for the species; this destruction occurs through human activities and through the invasion of other plants, especially shrubs. The Ontario populations are most at risk from invasion of non-native species, shoreline erosion and slumping.

The Hoary Mountain-mint is protected by the Ontario Endangered Species Act. Under this Act, it is prohibited to kill, harm, harass, or collect this species, or to destroy its habitat.

Summary of Progress to Date The Hoary Mountain-mint recovery team aims to protect and enhance existing populations. Additionally, historical sites will be evaluated to determine if habitat restoration and reintroduction of Hoary Mountain-mint is advisable. Summary of Research/Monitoring Activities An extensive survey and census conducted in 2000 and 2001 identified three remaining Hoary Mountain-mint populations. A large population was re-discovered in 2001 based on an historical account. These populations have been mapped and are monitored annually. The habitat in which each population occurs has been described and potential site-specific threats identified. The habitat requirements of Hoary Mountain-mint need to be assessed in greater detail in order for effective recovery planning to take place. In particular, researchers are trying to determine why germination of seeds and survival of seedlings is so low. Prescribed burns will be tested as a habitat restoration technique. Because so few populations of Hoary Mountain-mint remain, prescribed burns may be tested on sites where the plant is to be reintroduced. Hoary Mountain-mint seeds have been collected and preliminary propagation studies have been completed. Plant propagation will take place at the Royal Botanical Gardens as well as a demonstration site at the Cootes Paradise Fishway where they will be used for further research and seed collection for potential population augmentation and reintroduction. Summary of Recovery Activities All remaining populations of Hoary Mountain-mint occur on either municipal or private land. The cooperation of landowners is imperative to the recovery of this species. Habitat restoration has begun at one site, where landowners are attempting to remove invasive species and restore the area to oak savanna and open woodland. More removal of exotic plants is planned, and the effectiveness of alternative removal techniques will be monitored.