This orchid is known historically from only 3 sites in Ontario, but it has not been seen since 1996 despite searches at two of the three previously known sites.  The species requires rich, deciduous or mixed, moist forest on sandy soil with abundant humus; this habitat continues to decline in quality due to trampling and exotic plants and earthworms.  It is possible that this species may still be extant in Canada since many orchids are known to have long dormancy periods and often occur in very low numbers.
COSEWIC History of Status Designation: Designated Endangered in April 1986. Status re-examined and confirmed Endangered in April 1998, May 2000, and November 2011.
SARA Status: Schedule 1, Endangered
Date of Listing (yyyy-mm-dd): 2003-06-05 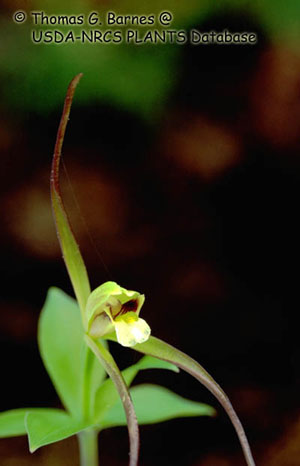 Large Whorled Pogonia (Isotria verticillata) is an orchid that has a single whorl of five to six leaves at the top of the stem. The leaves may be overtopped by a single yellowish-green flower. The five narrow, purplish sepals are much longer than the petals. (Updated 2017/05/23)

The orchid occurs in the United States from New England and Michigan south to Texas and Georgia. Its only Canadian occurrence is in southwestern Ontario. In 1986, the orchid was known at two sites. Since that time it seems to have disappeared at one of the sites and only one plant has been seen at the other site. A third station was found after the status report was written; however, it seems to have been eliminated recently. (Updated 2017/05/23)

This plant requires rich, moist, deciduous or mixed forest on sandy soil with a thick leaf litter, lots of humus, and a relatively open canopy. (Updated 2017/05/23)

Large Whorled Pogonia is a relatively small and inconspicuous plant that is very similar to non-flowering shoots of the common Indian Cucumber-root (Medeola virginiana). This similarity could cause the orchid to be trampled inadvertently by those trying to find the species. (Updated 2017/05/23)

The main limiting factor is the lack of suitable mixed forest habitat with an acidic substrate in the heavily developed Carolinian Zone of southwestern Ontario. The species is at risk from trampling by those who would like to find or photograph this rare orchid. (Updated 2017/05/23)