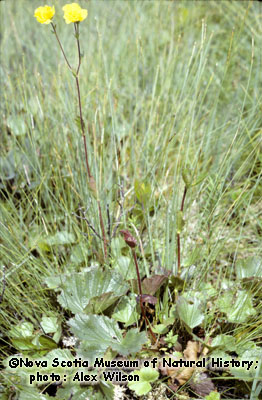 The Eastern Mountain Avens is a herbaceous perennial, 20-40 cm tall. The leaves are basal and compound with one large, rounded terminal leaflet and several very small lateral ones. The flowering stalk bears 1-5 yellow flowers. Each flower produces about 50 seeds. In Nova Scotia, the plant flowers from June until September.

Eastern Mountain Avens occurs in the White Mountains of New Hampshire in the U.S.A., and on Brier Island and Digby Neck of Digby County, in Nova Scotia. On Brier Island there are a small number of scattered populations, each consisting of less than several hundred individual plants. Large populations in one bog on the island have decreased over the last 40 years and currently are seriously threatened by an expanding gull colony and active drainage. A single population recently discovered on the mainland (Digby Neck) consists of about 300 flowering plants and at least as many vegetative plants.

In Nova Scotia, the Eastern Mountain Avens generally occurs in boggy terrain amongst shrub vegetation, but may be found in dryish depressions on mineral soil.

The plant flowers from June to August. The seeds mature in late August or September. Reproduction occurs through shoots from rhizomes, or from seeds. Insects, especially small flies, are the main pollinators.

Encroaching shrub and tree vegetation is causing declines in some formerly significant populations in one bog on Brier Island. The encroachment appears to have resulted from drainage ditches dug in the 1950s and an expanding gull rookery. The gulls trample plants, bring in weed seeds, and alter the nutrient levels in the area. Road ditching recently destroyed another patch of avens. Potential threats include house/cottage construction and increased ecotourism.

The Eastern Mountain Avens is protected by the Nova Scotia Endangered Species Act. Under this Act, it is prohibited to kill, harm, or collect this species.

Summary of Progress to Date Recovery of Eastern Mountain Avens is being coordinated through the Atlantic Coastal Plain Flora Conservation and Recovery Team. However, the recovery initiates for Eastern Mountain Avens are separate from the Atlantic Coastal Plain Flora recovery initiatives. Most Eastern Mountain Avens in Canada grow on Brier Island, and about one half of the island’s population is protected on land owned by the Nature Conservancy of Canada. The rest of the plant’s distribution occurs on private land on Brier Island and the nearby “Digby Neck” of the mainland. In 2003, the Nature Conservancy of Canada conducted an inventory of Eastern Mountain Avens on Brier Island. Threats to the plant’s habitat were also assessed, as was the possibility of bog habitat restoration. The study showed that the central drainage ditch is affecting soil water conditions as far as 40 meters from the ditch; this causes the bog to become drier, which facilitates the encroachment of shrubs, thereby threatening a significant portion of Eastern Mountain Avens’ habitat on Briar Island. As well, scattered areas of gull-trampled habitat covered approximately 20-30% of the bog surface. However, ATV damage was found to be limited to only 2 or 3 main paths along the length of the bog. The study recommended several options for restoration of the bog’s water table, which are being considered. Restoring the water table to pre-ditching levels should change the habitat enough to discourage the gulls from nesting and prevent shrubs from encroaching on the Eastern Mountain Avens habitat.