This showy perennial lake and river shore plant has a restricted global range with a disjunct distribution limited to southernmost Nova Scotia. There is a concern regarding potential widespread and rapid habitat degradation due to recent increases in levels of phosphorus in lakes, tied to a rapidly growing mink farming industry.  Though the population size is now known to be larger than previously documented due to greatly increased survey effort, the species is also at risk due to the continuing impacts associated with shoreline development, and historical hydro-development.
COSEWIC History of Status Designation: Designated Endangered in April 1984. Status re-examined and confirmed Endangered in April 1999, May 2000, and November 2012.
SARA Status: Schedule 1, Endangered
Date of Listing (yyyy-mm-dd): 2003-06-05 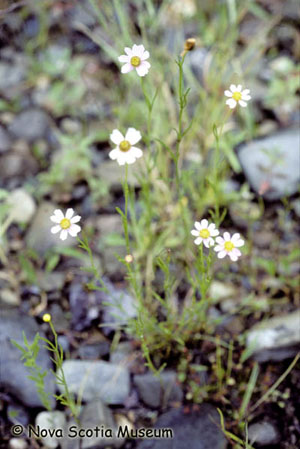 The Pink Coreopsis is a perennial herb. The flowers grow at the end of stalks which measure 20 to 60 cm in height. The daisy-like, composite flowers are formed of pink (outer) and yellow (inner) flowers. The capsules measure about 2 mm in length.

Pink Coreopsis occurs along ten eastern seabord states in the U.S.A. and in southwestern Nova Scotia in Canada. The Nova Scotia sites are on Salmon, Wilsons and Bennetts lakes in the Tusket River valley. The plant has been extirpated from three other lakes in Nova Scotia, due primarily to the establishment of reservoirs for generation of hydroelectricity. More than 5000 plants (flowering and vegetative) were counted recently at Salmon Lake. The counts for the other two lakes date from 1984, when less than 1000 flowering plants were found. It is thought that ongoing cottage development and all-terrain vehicle activity have probably impacted on these populations during the intervening years.

This species reproduces primarily by asexual means, in the form of subterranean runners or stolons. Sexual reproduction is sporadic in Nova Scotia, where the plant is at the northern limit of its range. Low water levels are required for flowering to occur. Flowers bloom from mid-July to mid-September, and the seeds mature in late August and September. The relatively small number of seeds produced limits the ability of the species to recover from severe habitat disturbance.

Pink Coreopsis is naturally limited by the scarcity of its specific habitat, and by its low production of seeds. The destruction or modification of habitat due to cottage development, and trampling of plants by off-road vehicles and recreational activities, are major threats for Pink Coreopsis. The control of water levels, especially through the construction of dams and wharves, interferes with the natural processes necessary to the survival of Pink Coreopsis. Potential threats include eutrophication of lakewaters due to runoff of various types (e.g., septic, agricultural, forestry, industrial), which would eventually increase shoreline fertility and encourage invasion by more aggressive plant species, and possible re-zoning of shorelines by municipalities for recreational development.

The Pink Coreopsis is protected by the Nova Scotia Endangered Species Act. Under this Act, it is prohibited to kill, harm, or collect this species. A large population occurs within the provincial Tusket River Nature Reserve.