Scientific Name: Empidonax virescens
Taxonomy Group: Birds
COSEWIC Range: Ontario
COSEWIC Assessment Date and Status Change: April 2010
COSEWIC Status: Endangered
COSEWIC Status Criteria: D1
COSEWIC Reason for Designation: In Canada, this species is restricted to certain types of mature forest in southern Ontario. Only small numbers breed in Canada. Although the population appears to have been relatively stable over the past 10-20 years, this is most likely due to immigration from U.S. populations. The species is threatened by forestry practices, particularly those that target removal of large trees. Serious conservation concerns, both in Canada and the adjacent U.S. also stem from increasingly widespread losses of a variety of favoured nest tree species owing to the spread of an array of invasive forest insects and pathogens. Collectively, these threats to habitat greatly reduce potential for rescue from adjacent U.S. populations.
COSEWIC History of Status Designation: Designated Endangered in April 1994. Status re-examined and confirmed in November 2000 and April 2010.
SARA Status: Schedule 1, Endangered
Date of Listing (yyyy-mm-dd): 2003-06-05 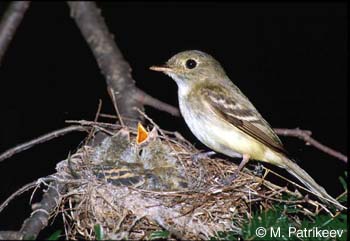 The Acadian flycatcher is an olive-green songbird with a long and slightly forked tail, white wing bars, and a yellowish belly. In size, it is slightly larger than a house sparrow, and in appearance it is similar to other flycatchers of the genus Empidonax. A unique two-note song described as "ka-zeep", and its location in its preferred habitat, are two features that help to identify this species.

The Acadian flycatcher breeds only in North America, primarily in the eastern half of the United States where the species is widespread and common. It winters in Central America and northern South America from Nicaragua to Ecuador and Venezuela. In Canada, the Acadian flycatcher occurs in very low numbers in the Carolinian area of southern Ontario. The species is thought to have been more widespread and numerous in Canada prior to the clearing of forests in the early 1800s. Today, there is relatively little habitat remaining that is suitable for the species. In the 1980s, it was estimated that 41-75 pairs occurred in Canada and surveys revealed only 38 birds in 1992. Surveys carried out in 1997 found 34 singing males and yielded an estimate of fewer than 50 pairs. The 1998 data suggest that there are still between 35 and 50 pairs in Canada. The most recent population estimate counted 20 to 30 pairs of birds. Though recent field work has led to the discovery of a new breeding area and a few additional sites, the population is still at a low level and shows no signs of increasing in Canada.

The Acadian flycatcher requires large areas of mature undisturbed forest. Most individuals occur in forests more than 40 hectares in size. The species is also considered to be a forest interior species, meaning that it avoids forest edges and build their nests in areas that are more than 100 meters from the forest edge. The bird lives in the understory of woods with a closed canopy. It is often found in well-wooded swamps and ravines. Acadian flycatchers also occupy dry woods but they usually prefer to hang their nests over water. Prior to the 1800’s, the Carolinian area of Ontario would have had abundant suitable habitat for this species. Currently, very little of the forest remains and the remnants are highly fragmented. Throughout the Carolinian Forest region of Ontario, most of the remaining forest patches are very small (less than three hectares) and only an extremely small percentage of them is large enough to meet the species’ requirements.

The bird reaches maturity at one year and has a lifespan of up to 10 years. Males attract females with their unique song and erratic courtship displays, and establish nesting territories. The females choose breeding sites and build nests of vegetal debris and spider silk. The nests are suspended hammock-wise from the fork or crotch of a shade tree 2.5-4.5 meters above the ground. Females lay one egg per day until a clutch of three or so creamy white, brown-spotted eggs is complete. In Ontario, eggs are laid between June 8 and July 30. Incubation is done solely by the females and lasts 13 to 15 days; males actively defend the nesting sites. Like other flycatchers, the species mainly forages in flight, catching flying insects such as bees, wasps, ants, beetles, and moths.

The main limiting factor is continuing forest loss in southern Ontario. Perhaps equally important are logging practices in the remaining forests that are incompatible with maintaining the species. Residential and agricultural development in or near woodlots can also have negative consequences for sensitive wildlife like the Acadian flycatcher.

The Acadian Flycatcher occurs within Long Point Wildlife Area, which is federal land protected under SARA. It is protected by the Canada National Parks Act where it occurs in Point Pelee National Park. It is also protected by the federal Migratory Birds Convention Act. Under this Act, it is prohibited to kill, harm, or collect adults, young, and eggs.