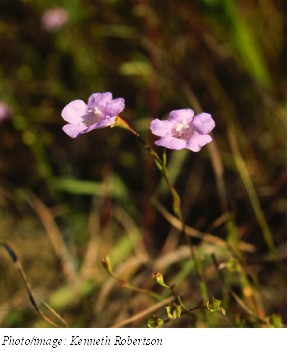 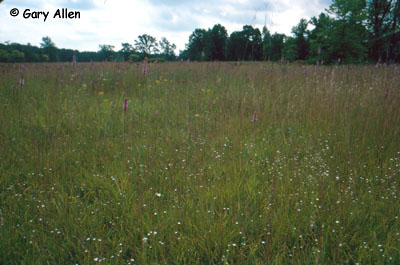 Skinner's Agalinis is an annual herb which measures 10 to 60.5 cm in height. The stem is pale green and may have a few branches near the top. The leaves measure 5 to 20 mm in length and 0.5 to 1 mm in width, and have rough short hairs. The flower is bell shaped and measures 10 to 17 mm in length. The corolla of the flower is pink to white, with pale yellow lines and pale red spots; there are fine hairs on the exterior surfaces of the flower. The capsules are round; the yellow to tan seeds measure 0.5 to 1 mm in length.

Skinner's Agalinis occurs in eastern U.S.A. and in extreme southwestern Ontario. In 1987, there were 11 sites known on Walpole and Squirrel islands in Lambton County, Ontario, and one small site in neighbouring Essex County. Only five of the Lambton sites still contained specimens in 1997; the current status of the Essex site is unknown.

In Canada, Skinner's Agalinis flowers from August to mid-September. The fruit matures in late September or October. This plant reproduces mainly through seeds.

Loss of habitat and human disturbances are the main limiting factors for Canadian populations of Skinner's Agalinis. In addition, the prairie remnants on the delta islands are subject to changes in water levels, invasion by competitive species, and changes in species composition resulting from fire suppression.

The Skinner's Agalinis occurs on land belonging to the Walpole Island First Nation, which is federal land protected under SARA. It is protected elsewhere by the Ontario Endangered Species Act. Under this Act, it is prohibited to kill, harm, harass, or collect this species, or to destroy its habitat.