Scientific Name: Lespedeza virginica
Taxonomy Group: Vascular Plants
COSEWIC Range: Ontario
COSEWIC Assessment Date and Status Change: May 2013
COSEWIC Status: Endangered
COSEWIC Status Criteria: B1ab(i,ii,iii)+2ab(i,ii,iii); D1
COSEWIC Reason for Designation: This perennial species occupies small patches of remnant tallgrass prairie and savanna at just one location in southern Ontario, where it is at risk from the combined impacts of a lack of natural disturbance by periodic fires and the presence of invasive plant species.  There is a continuing decline in the quality and area of habitat available for the plant.
COSEWIC History of Status Designation: Designated Endangered in April 1986. Status re-examined and confirmed Endangered in April 1999, May 2000, and May 2013.
SARA Status: Schedule 1, Endangered
Date of Listing (yyyy-mm-dd): 2003-06-05 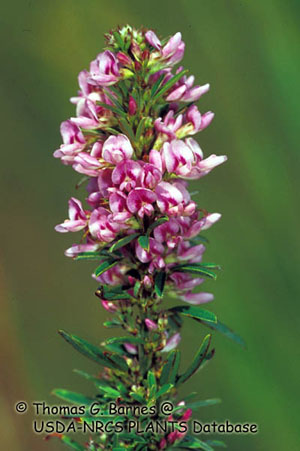 Slender Bush-clover (Lespedeza virginica (L.) Britt.) is an erect perennial herb in the pea family (Fabaceae). It is generally less than 1 m tall, and occasionally branched, arising from a woody, nodule-bearing rhizome. Its stem, leaves, branches, stalks and fruit are covered with short, appressed hairs. The trifoliate, compound leaves are strongly ascending with leaflets ranging in size from 1.5 to 3 cm. Flowers are pea-like in appearance, normally pink to purple. Fruits are single-seeded 4-7 mm pods produced by either chasmogamous (open) or cleistogamous (closed) flowers. Canadian populations of Slender Bush-clover are near the northern range limit for the species (some U.S. populations are frrther north); populations at the edge of a species’ range may be genetically distinct. (Updated 2017/05/31)

Slender Bush-clover ranges from eastern Texas and northern Florida to central New England, southern Ontario, and southern Michigan. Disjunct populations occur in central Wisconsin, southern Minnesota, and northern Mexico. In Canada, it is currently known from a single subpopulation in southwestern Ontario in the City of Windsor, representing less than 1% of its global range. (Updated 2017/05/31)

Slender Bush-clover is found in a wide variety of open habitats across its range from old fields, prairies, roadsides and clearings, to savannas, pine barrens, dry upland woods, and woodland borders. In Ontario, it is restricted to tallgrass prairie and savanna habitat of the Ojibway Prairie complex. (Updated 2017/05/31)

Slender Bush-clover produces flowers and fruits many times over its lifespan, and plants have been shown to live up to 17 years elsewhere in its range. It flowers mainly in August and September in Ontario. Plants can produce both chasmogamous (open) flowers, pollinated mainly by bees and butterflies, and cleistogamous (closed) flowers that self-pollinate in bud. Slender Bush-clover is drought- and fire-tolerant, possessing woody rhizomes with nodules that fix nitrogen because of symbiotic interactions with bacteria. Seeds have hard coatings and germination may be enhanced through scarification, either by ground fires or passage through the digestive tracts of animals, and seeds have been shown to remain viable for at least 54 years. It is a food plant for a variety of insects and a nectar source for many others. (Updated 2017/05/31)

The destruction of much its original habitat has severely fragmented the southern Ontario landscape, isolating the remaining subpopulations from other areas of suitable habitat, and thus limiting the species’ ability to expand. The tallgrass prairie and savanna habitats that the species currently occupies are critically imperiled in Ontario. Current threats to Slender Bush-clover are: 1) altered disturbance regime resulting in successional changes to habitat, reducing open areas for germination and overall growth and survival; and 2) interspecific competition from invasive species, namely Crown-vetch, Spotted Knapweed, and Autumn Olive. (Updated 2017/05/31)