Scientific Name: Cypripedium candidum
Taxonomy Group: Vascular Plants
COSEWIC Range: Manitoba, Ontario
COSEWIC Assessment Date and Status Change: November 2014
COSEWIC Status: Threatened
COSEWIC Status Criteria: Does not clearly meet criteria, but designated Threatened because of small IAO, documented losses of subpopulations, declines in habitat quality, and life history characteristics.
COSEWIC Reason for Designation: This orchid is known in Canada from Manitoba and Ontario where it grows mainly in tallgrass and mixed grass prairies. These sites require management to prevent encroachment of woody vegetation and to remain suitable for the orchid. Increased search effort has uncovered previously unknown populations in Manitoba, but many populations are small, and some have been lost in recent years. The discovery of additional populations, increased habitat protection, and active management for this species resulted in a change in status from Endangered to Threatened. Because individuals are slow to mature and require a fungal partner, the species is especially vulnerable to local extirpations. In addition to encroachment, the species is threatened by invasive plant species, alteration of hydrology, residential and commercial development, roadside maintenance and illegal collecting.
COSEWIC History of Status Designation: Designated Endangered in April 1981. Status re-examined and confirmed in April 1999 and in May 2000. Status re-examined and designated Threatened in November 2014.
SARA Status: Schedule 1, Threatened
Date of Listing (yyyy-mm-dd): 2003-06-05 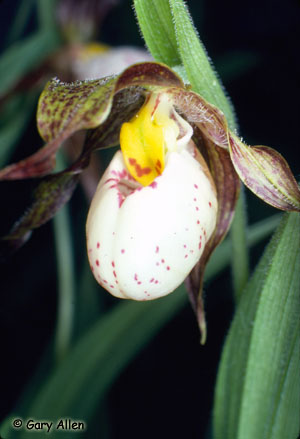 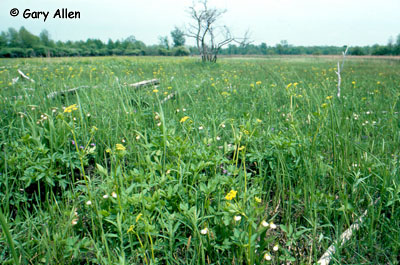 The Small White Lady's-slipper is a terrestrial perennial orchid which measures 20 to 36 cm in height. It grows from a rhizome and forms a bunch of 3 to 60 stems. About 3 or 4 long straight leaves grow from the center of the stem. The flower of this plant resembles a small slipper, hence its name. This small white flower is sometimes coloured by a delicate purple line; the opening and the interior of the flower are speckled with darker purple; the petals are twisted.

The Small White Lady's-slipper is found in 15 states in the U.S.A. and in Manitoba and Ontario in Canada. In Manitoba, it is found in three widely separated areas: southeastern Manitoba, the southern Interlake district (between the southern ends of lakes Winnipeg and Manitoba), and the Brandon area in south-central Manitoba. While additional populations have been found in the province since the species was first designated by COSEWIC, four sites in south-central Manitoba appear to be extirpated. The Small White Lady's-slipper has disappeared from Saskatchewan and from the Bruce, Kent, Norfolk and Welland counties of Ontario; a few plants are still found in Lambton County and Hastings counties in Ontario. In Manitoba, aggregate populations occur in the Tolstoi-Gardenton (Tall Grass Prairie Preserve), Brandon, and St. Laurent areas. Single populations occur in the Lake Francis, Woodlands, Brandon Hills and Kleefeld areas. In the largest of these sites, part of the Tall-grass Prairie Preserve in southeastern Manitoba, up to 13,979 plants have been counted in a given year. In 1997, a total of 34,491 stems were counted in the Preserve, of which 16,899 were flowering stems. The Kleefeld population consisted of about 552 stems (68% flowering) in 1998. The Lake Francis and Woodlands populations each had about 80 stems in 1998. Of the six populations in the Brandon area, four are within fields and range from 100 to 984 stems, while the other two are along road allowances and range from 10 to 293 stems.

In the past, the Small White Lady's-slipper occurred in open tall grass prairies, dry-mesic hillsides, low calcareous prairies, and calcareous fens. Today, due to agricultural development and urbanization in the western provinces, it is found in prairie openings in wooded grasslands, or on more open sites with a southerly aspect and calcareous sandy loam soil. The few plants which survive in the eastern part of the country are found in marshes, in marshy limestone meadows, in prairie areas, and on the edges of brush.

Several stems can grow from one rhizome, but each stem has only one flower. The Small White Lady's-slipper depends on insects, mainly bees, for pollination. It takes approximately 13 years for the Small White Lady's-slipper to flower. Flowering in Manitoba usually begins in late May or early June. Frost damage occurs during the flowering season at least once every five years, reducing the plants' ability to produce food and reproduce.

In Manitoba, encroachment of woody vegetation into the prairie zone, possibly as a result of discontinued fire and grazing, threatens most Small White Lady's-slipper habitats. Late spring frosts negatively impact on flowers and subsequent seed production. Collection of plants by amateur, commercial and scientific collectors threatens roadside populations in particular. Shading and competition from invasive weed species such as leafy spurge Euphorbia esula and St. John's wort Hypericum perforatum are a threat to most sites. Isolated, small populations in the Interlake district may be at risk due to lack of genetic diversity.

The Small White Lady's-slipper is protected by the Manitoba and Ontario Endangered Species Acts. Under these Acts, it is prohibited to harm individuals of this species or its habitat. This plant occurs within the provincial Tall Grass Prairie Preserve in Manitoba.

The Small White Lady's-slipper is included in Appendix II of the Convention on International Trade in Endangered Species of Wild Fauna and Flora (CITES), which sets controls on the international trade and movement of species that have been, or may be, threatened due to commercial exploitation.