This small orchid, previously known only from a single swamp in Ontario, requires mixed damp woods. It was assessed as Endangered in 2000. Its habitat continues to decline in quality due to trampling and exotic earthworms. It was last seen in 1998, though its potential for dormancy means it may still be extant.
COSEWIC History of Status Designation: Designated Endangered in April 1982. Status re-examined and confirmed in April 1998, May 2000, and May 2011.
SARA Status: Schedule 1, Endangered
Date of Listing (yyyy-mm-dd): 2003-06-05 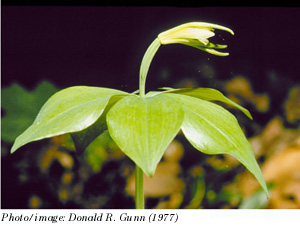 The Small Whorled Pogonia requires damp, mixed woods with an acidic soil. There is usually abundant leaf mould, but limited shrub and herbaceous cover. A forest with small openings and a flat floor is preferred.

The Small Whorled Pogonia flowers from May to June. The likelihood of the seeds germinating, and thus of the plant reproducing, is very low.

The Small Whorled Pogonia is very sensitive to disturbance, as is typical of all orchids. Collection of specimens for scientific purposes has been the cause of the loss of many plants. Trampling and loss of habitat are also limiting factors for the Small Whorled Pogonia. A trail used by trail bikes and all-terrain vehicles crosses the orchid habitat at Calton Swamp; trail traffic has caused the demise of at least one group of pogonias.

The Small Whorled Pogonia is protected by the Ontario Endangered Species Act. Under this Act, it is prohibited to kill, harm, harass, or collect this species, or to destroy its habitat. It occurs in the Calton Swamp Wildlife Management Area.

The Convention on International Trade of Endangered Species of Wild Fauna, of which Canada is a member, protects the Small Whorled Pogonia against international trade.