This delicate fern is known in Canada from three to four subpopulations in a single natural hot spring in southeastern British Columbia. It is threatened by changes in hydrology, development, recreational activities and collection, and is limited by availability of suitable microhabitat conditions. Large declines (greater than 90%) have been recorded in the past 10 years, though the plant may remain dormant underground and one subpopulation has rebounded after four survey years in which few or no fronds were detected.
COSEWIC History of Status Designation: Designated Endangered in April 1984. Status re-examined and confirmed in April 1998, May 2000, and May 2011.
SARA Status: Schedule 1, Endangered
Date of Listing (yyyy-mm-dd): 2003-06-05 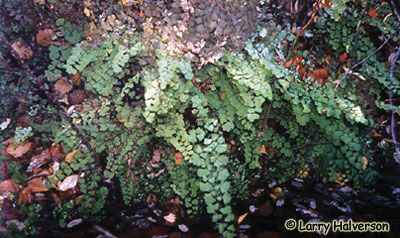 The Southern Maidenhair Fern is a pale green, delicate fern. Its fronds are drooping and short, measuring 15 to 30 cm; they wilt at the first frost.

In Canada, the Southern Maidenhair Fern is found in only two locations, in the vicinity of the Fairmont Hot Springs in southeastern British Columbia. This is a tropical/subtropical species whose North American distribution is mainly in the southern United States (from central California to Virginia and south to Florida and Mexico). There is one other small North American population restricted to a hot springs, in South Dakota. The fern also occurs in South America and Eurasia. The Southern Maidenhair Fern has been known to occur at the Fairmont Hot Springs since 1888. It was still abundant at several sites on the resort in the 1940s, but resort development has caused the elimination of all but two sites. In 1996, only 16 sterile fronds remained on about four plants at one location, and hundreds of fronds were found at the second location in 2000. The reproductive status of the fronds at the second site has yet to be determined. The site's status is therefore extremely precarious.

The Southern Maidenhair Fern grows on lime-rich, porous rock, often on rocky cliffs and walls. At the Fairmont Hot Springs in Canada, where the plant is living more than 1000 km north of its main range, the fern requires the warm and very humid climate found in the natural hot springs environment to survive.

In Canada, the Southern Maidenhair Fern reproduces only through the expansion of the rhizome, since all the fronds die in the winter. The Canadian plants are not producing spores.

Summary of Progress to Date A recovery team has been initiated for Southern Maidenhair Fern. Summary of Research/Monitoring Activities In surveys of Southern Maidenhair Fern, fronds are counted, so these are not all genetically unique individuals. In 1996 only four Southern Maidenhair Ferns at one site were known to remain in British Columbia. The recovery team determined that conducting surveys to locate the entire population was an urgent priority. Surveys conducted in 2000 and 2002 located three additional sites with a total of 33,650 ferns, improving the prospect for recovery. Since this time, all sites have been monitored annually. By 2004, the fern had become extirpated at one site and was almost extirpated at another site, due to drying conditions resulting from unexplained alterations in thermal spring flows. However, with over 30,000 ferns remaining at two sites, recovery remains entirely feasible. Summary of Recovery Activities The recovery team is currently preparing a management strategy for the Fairmont Resort property, where the two remaining Southern Maidenhair Ferns sites are found. In the meantime, the resort has undertaken several voluntary stewardship activities to provide habitat and protection for the fern.