Scientific Name: Chimaphila maculata
Taxonomy Group: Vascular Plants
COSEWIC Range: Ontario, Quebec
COSEWIC Assessment Date and Status Change: April 2017
COSEWIC Status: Threatened
COSEWIC Status Criteria: B1ab(i,ii,iv)+2ab(i,ii,iv)
COSEWIC Reason for Designation: This low-growing perennial plant is restricted to sandy soils in southern Ontario. Since the last assessment, this species has been found at two new sites and lost at two others. The overall population has remained fairly stable but the five subpopulations are under threat from recreational activities and the possibility of wildfire.
COSEWIC History of Status Designation: Designated Endangered in April 1987. Status re-examined and confirmed Endangered in April 1998 and in May 2000. Status re-examined and designated Threatened in April 2017.
SARA Status: Schedule 1, Threatened
Date of Listing (yyyy-mm-dd): 2003-06-05 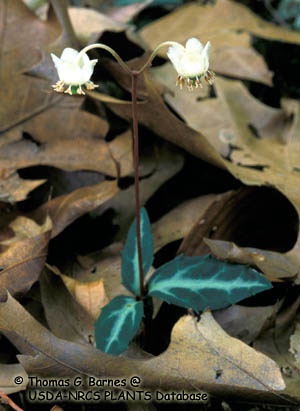 Spotted Wintergreen (Chimaphila maculata) is a small, low-growing, evergreen perennial that is woody at the base and spreads by rhizomes to form colonies. Each stem consists of a whorl of thick, blue-green, toothed leaves with a white stripe along the mid-rib and white areas extending from the mid-rib. Topping the whorl of leaves is a stalk supporting one to five nodding white or pinkish flowers. In a given year, only some of the stems in a subpopulation produce flowers. The rounded seed capsules become erect after flowering, and contain numerous tiny seeds. (Updated: 2018/01/19)

Spotted Wintergreen occurs in eastern North America, Mexico, and Central America. Its range in eastern North America extends from southern Michigan and Ontario, east to southern New Hampshire and Maine, and south to Mississippi and northern Florida. Historically, Spotted Wintergreen was more widely distributed in southern Ontario and into southwestern Quebec. It is now restricted to a few subpopulations in southern Ontario and is considered extirpated in Quebec. In Canada, there are currently five extant subpopulations. Surveys between 2011 and 2014 show a total Canadian population of at least 3587 (~3600) stems. The number of genetic individuals is not known, although it is presumably smaller. Previously reported population sizes are in the vicinity of a few hundred stems; however, two of the extant subpopulations (and several smaller sites) have been discovered since the most recent status report, and both are significantly disjunct from other extant sites. These probably do not represent newly established subpopulations, but may reflect increased survey effort and reporting of observations. Most sites known since around 2000 have remained at least stable, while some have increased in abundance and extent, evidenced by regular monitoring. There are additionally two historical and six extirpated subpopulations. There is a possibility that plants persist at either historical site. Most of the extirpated records are only known through vague locality or population information and have never been relocated. One small subpopulation discovered near Montréal in 1992 may have been planted and is now believed to be extirpated. (Updated: 2018/01/19)

Spotted Wintergreen flowers in late July to early August. It can reproduce either clonally or by seed. As stems arise from creeping rhizomes, clumps or contiguous groupings of stems likely represent ramets rather than unique genetic individuals. The tiny, dust-like seeds in this family are dispersed mainly by wind. (Updated: 2018/01/19)

Recreational activities are probably the predominant threat to extant subpopulations of Spotted Wintergreen; however, fire has the potential to have the greatest impact as this species appears to not persist after fire. Most extant sites are in public ownership and are protected from loss due to development but many sites are publicly accessible, and a few may be vulnerable to ATV damage and soil compaction from adjacent walking trails. Many sites do not appear to have any imminent threats, although their small size and spatial extent make them vulnerable to even localized disturbances. Invasive species are present at or near a few sites, but do not appear to negatively affect ramet (or shoot) numbers within these subpopulations. Habitat degradation (e.g., by garbage dumping) may also have limited impacts on some Spotted Wintergreen subpopulations. This species may be limited to some degree by its dependence on soil mycorrhizae and its reproductive biology. (Updated: 2018/01/19)