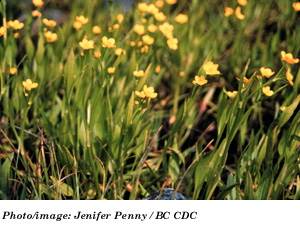 The Water-plantain Buttercup, Ranunculus alismifolius, consists of several varieties. Since only var. alismifolius occurs in Canada, it is considered a species in its own right.

The Water-plantain Buttercup occurs throughout almost all of western North America, from British Columbia south to California and east to Montana, Wyoming and Colorado. In Canada, the species is presently found at only two locations along the east coast of Vancouver Island, in southwestern British Colombia. Historically, the Water-plantain Buttercup has been found in at least two, and perhaps as many as four locations in Canada, but there were only two very small populations extant in 2007 occupying tiny areas of habitat: the Oak Bay population, consisting of 121 flowering plants, and the Ballenas Island population, consisting of 185 plants. The Canadian population seems to fluctuate between about 45 and 306 mature, reproductive individuals per year. The long-term viability of such small populations at ongoing risk from several factors is unlikely.

In Canada, the Water-plantain Buttercup occurs in vernal pools located in prairies interspersed with Garry Oak, where summer temperatures are greatly moderated by the proximity to the ocean. In these coastal areas, fog and the proximity to the shoreline tend to moderate winter frosts and retard the accumulation of heat, and may slow down the development of plants, particularly in late spring. Coastal vernal pools are free of trees because they are flooded in winter and often experience droughts in summer. In Canada, such habitats are found only on southeast Vancouver Island and on some of the Gulf Islands. The amount of potential Water-plantain Buttercup habitat has shrunk considerably since the early 1900s, as vernal pools have been destroyed during the development of land for residential and recreational use. The sites supporting the two remaining Canadian populations are unlikely to be developed in the foreseeable future, but there is a continuing decline in the extent of sites suitable for replacement populations to make up for those lost in the past.

There is little information on the biology of the Water-plantain Buttercup. It is known, however, that the shoots of this perennial appear in early March, when the soil in the vernal pools begins to warm up. Most plants resume growth in late March. The first flowers develop before the end of April, and flowering peaks in mid-May. The bright yellow flowers are primarily insect-pollinated. Green fruits develop in May and early June, and ripen in about mid-June. In the following two weeks, the soil dries out completely, the plants slowly die back and the seeds fall near the plant. In contrast to other buttercups, the achene beak of the Water-plantain Buttercup is not hooked, and the fruits are less likely to disperse on animal fur or bird plumage. Birds may occasionally consume ripe seed lying on the soil surface and carry them away, within their gut or attached to their muddy feet, to new locations. Most seeds are probably dispersed over short distances floating in pooled water. The species does not reproduce vegetatively. The longevity of the Water-plantain Buttercup is unknown, but plants may require several years after germination to flower.

In British Columbia, habitat loss is an immediate threat to the Water-plantain Buttercup. The vernal pools where the species now occurs have a significant component of invasive herbaceous plants. These invasive species compete with the Water-plantain Buttercup for light and nutrients. The Oak Bay population occurs at the junction of several walking trails within a heavily used municipal park. The habitat is greatly affected by soil compaction and occasionally damaged by trampling by dogs. Park maintenance, including mowing, often results in the destruction of plant species, including the Water-plantain Buttercup. Cyclists have also damaged plants by setting jumps and ramps nearby. There are no serious or immediate threats to the Ballenas Island population. Herbivores pose a threat to population processes, as they often destroy the flowers before seeds are produced.

The Water-plantain Buttercup is not protected under any provincial legislation in British Columbia. The small Ballenas Island population is located on Department of National Defence property, which is federal land protected under the Species at Risk Act (SARA).