In Canada, this rare sedge is found in southern Ontario and Quebec where fewer than 250 mature plants have been found.  There have been substantial historical population losses attributed to residential development and other forms of land use.  Continued declines are attributed to late season flooding, land drainage, invasive alien species, recreation, erosion, garbage deposition, water regime regulation, and residential and urban development.  Recovery efforts have included re-introduction at three sites in Quebec.
COSEWIC History of Status Designation: Designated Threatened in April 1997. Status re-examined and designated Endangered in May 2000 and November 2011.
SARA Status: Schedule 1, Endangered
Date of Listing (yyyy-mm-dd): 2003-06-05 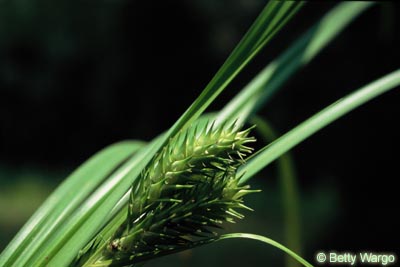 This sedge is a grasslike plant with triangular stems and four to seven leaves, each 30 to 80 cm long, six to 13 mm wide. It grows in clusters, emerging from scaly rhizomes (horizontal underground stems) to reach above 50 cm in height. Spikes are longer and less dense compared to those of the closely related but shorter Carex lupulina. Individuals bear female and male organs. The angles of its achenes (one-seeded fruits that do not open to release seed) bear prominent nipple-like knobs.

The False Hop Sedge is a North American species, distributed throughout eastern United States and southernmost Ontario and Quebec. It is one of the rarest sedges in Canada, known to occur in only five locations in Ontario (London, Amherstburg, Elgin County (two sites) and Mount Brydges) and three in Quebec (all in and around Marcel Raymond Ecological Reserve). The Quebec sites represent the northeastern limit of the species' range. Local populations generally consist of five to 100 specimens, although two sites in Ontario boast more than 100 plants. The total Canadian population is estimated at fewer than 350 clusters of plants, about 300 of which grow in Ontario.

The Canadian populations occur only in the St. Lawrence Lowlands, where the annual precipitation ranges from 81-102 mm. The Quebec populations occur in grassland or scrubland areas of a maple and hickory forest. The Ontario populations grow within the Carolinian Forest zone in areas with swamps, marshes or temporary pools flooded in spring. Populations are largest in open areas with ample sunlight, such as forest edges or clearings.

The plant flowers from June to October. It reproduces sexually (by seed) and vegetatively (from rhizomes). Fruit appears from July to September. Flooding probably assists in seed dispersal.

This sedge's vigour is reduced when the availability of sunlight is limited, e.g., when blocked by tree canopy. Canadian climatic conditions may also be a limiting factor. Several Canadian sites are further threatened by loss of habitat due to residential construction, agricultural drainage, backfilling and regulation of water level for dams.

The False Hop Sedge is protected by the Ontario Endangered Species Act and the Quebec Act Respecting Threatened or Vulnerable Species. Under these Acts, it is prohibited to kill, harm, harass, or collect this species, or to disturb its habitat. The species occurs on the Marcel Raymond Ecological Reserve, which is owned by the government of Quebec.

Summary of Progress to Date Public awareness campaigns have increased stewardship actions among private land owners. The goal of public involvement in restoration activities is to reduce habitat loss since the destruction of wetland habitat is a leading factor in diminishing populations of False Hop Sedge and other species at risk. Without these stewardship agreements, many wetland habitats would not have any kind of protection. In Quebec, the species is declining. Six of the 11 known populations have disappeared, and the species hasn’t been seen in the last few years at three other sites. The two existing populations seem to face little threats other than a very low number of individuals, which requires immediate attention. Governments and academics have collaborated to produce site-specific conservation plans that will be implemented by local conservation groups and landowners. Summary of Research/Monitoring Activities In Ontario, population monitoring began in 2005 and will continue in 2006. Landowner stewardship has been initiated at each site. Some sites are being affected by municipal drainage, so wetland and hydrological restoration options are being explored. Summary of Recovery Activities A conservation plan for the Riviere du Sud Wetlands habitat is being developed. In the conservation plan, 825 hectares of wetlands would be protected and the agricultural community would be made more aware of the importance and exceptional value of this environment. In the St. Lawrence region of Quebec, voluntary conservation agreements with landowners of marsh, swamp, and peatland are being established to ensure the sustainability of the natural habitat. Greenhouse cultivation is underway with the intent of increasing the numbers of individuals in the wild in 2006. URLs Le Fleuve: Newsletter – St. Lawrence Vision 2000:http://www.slv2000.qc.ca/bibliotheque/lefleuve/vol11no8/terres_humides_a.htm