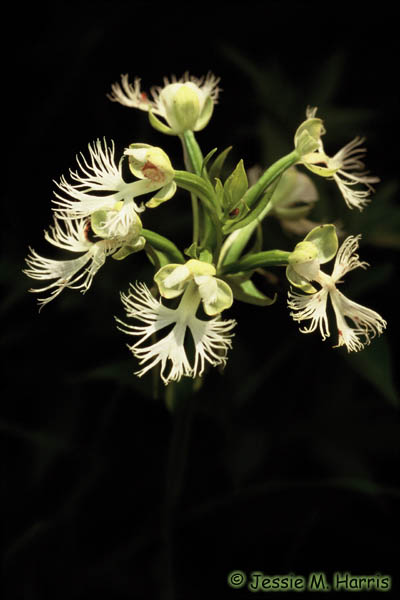 The range of Western Prairie Fringed Orchid extends from southeastern Manitoba south through Minnesota, eastern North Dakota, Nebraska, Iowa, Missouri and Kansas. The species is apparently extirpated from South Dakota and Oklahoma. In Canada, Western Prairie Fringed Orchid is found only in southeastern Manitoba, west of Vita in an area of approximately 100 km². The Canadian population, discovered in 1984, is considered to be the largest in the world. It is one of only three sites with over 1000 individuals in North America. The species is characterized by irregular flowering with mass flowering occurring in years of high precipitation and soil moisture conditions. Flowering plants greatly fluctuate in numbers from year to year with over 23,500 flowering stems counted in 2003 and only 763 observed in 2012. There have been 763 – 14,685 flowering individuals recorded in the past 10 years (2006-2015). [Updated 22/01/2018]

In the Canadian population, shoots appear above ground in late May and by late June have already formed a flower cluster. By mid-July most mature plants are in full flower with each newly opened flower lasting for several days. Non-mature plants, however, remain vegetative all year. Pollination is by sphinx moths and occurs at night. Capsules are formed by late August with plants beginning to wither by early September. Little information is available on seed germination and early development. Mycorrhizal fungi are required for successful development. Most reproduction is sexual. Some plants may remain dormant underground for one or more years relying on their mycorrhizal fungi to provide the plant with nutrition. Western Prairie Fringed Orchid forms symbiotic relationships with mycorrhizal fungi from the germinating seed to adult plant stage.

The species has a limited distribution in Canada with very little if any suitable habitat remaining outside the Vita area. The plants are sensitive to periodic climatic effects and are at risk from anthropogenic disturbance, such as conversion to cropland, overgrazing, drainage, ditch modification, invasive species, and climate change. The threats calculator indicates a high overall threat impact. Periodic fire is required in order to maintain the tall grass prairie habitat. The species appears to have a relatively low reproductive potential in that only a small portion of the flowers produce capsules. Pollination is affected by fluctuations in pollinator populations, wind and temperature. [Updated 22/01/2018]

Summary of Progress to Date A National Recovery Strategy was developed in 2006. In 1995, the Canadian Nature Federation produced a recovery plan for western prairie fringed orchid. Identification of remaining occurrences of the orchid and protection of sites supporting the orchid and its tall grass prairie habitat were identified as priorities. Since that time, the Manitoba Tall Grass Prairie Preserve has grown to over 2,000 hectares, containing about 80 percent of the Canadian population of western prairie fringed orchid. Summary of Research/Monitoring Activities Annual counts of flowering plants have taken place since 1992 and show dramatic fluctuations from one year to the next. Researchers have identified two moth species that pollinate the western prairie fringed orchid in Manitoba. Populations of these moths are small and the peak activity of the moths does not overlap completely with peak orchid flowering. Additional work is being done to identify factors limiting moth populations (e.g., availability of plants that moth larvae feed upon), which will lead to the development of habitat management measures that could increase the pollinator population. Researchers also are investigating the possibility that alternate nectar sources may attract moths away from orchids and are measuring the impact of light sources in the area that may reduce moth visits of orchids. Recovery action planning will include research and monitoring as a focus to answer a number of questions about the species and factors influencing it. Summary of Recovery Activities Management activities taking place at the Tall Grass Prairie Preserve, such as controlled burning, light to moderate grazing, and occasional mowing, have all been used to reduce woody growth and litter that might otherwise lead to woody species encroachment and crowd out orchids in the Tallgrass Prairie Preserve. Western prairie fringed orchid is listed as threatened in the United States and an American recovery plan has been developed. Information is exchanged regularly between the United States and Canada through the Western Prairie Fringed Orchid Working Group, a group of individuals from various federal, provincial, and state government and non-government agencies that are working with the orchid. A number of plant and animal species at risk are found in and around the Tall Grass Prairie Preserve. A multiple-species approach to recovery action will be implemented to conserve these species and to ensure that the recovery actions required by one or more species are coordinated to the benefit of all.