Scientific Name: Stylophorum diphyllum
Taxonomy Group: Vascular Plants
COSEWIC Range: Ontario
COSEWIC Assessment Date and Status Change: November 2007
COSEWIC Status: Endangered
COSEWIC Status Criteria: B1ab(iii)+2ab(iii)
COSEWIC Reason for Designation: A showy perennial herb of Carolinian woodlands restricted to 3 small and highly fragmented populations occupying very limited areas. The habitat is declining in quality due to the presence of invasive plants and habitat disruption due to recreational activities that increase the risk of trampling. Further potential habitat disruption may occur with the expansion of housing development and other commercial activities adjacent to two of the sites. The species is widely available from nurseries but garden-grown plants cultivated in Canada likely originate from U.S. stocks. Cultivated plants are not included in the COSEWIC assessment.
COSEWIC History of Status Designation: Designated Endangered in April 1993. Status re-examined and confirmed in May 2000 and November 2007.
SARA Status: Schedule 1, Endangered
Date of Listing (yyyy-mm-dd): 2003-06-05 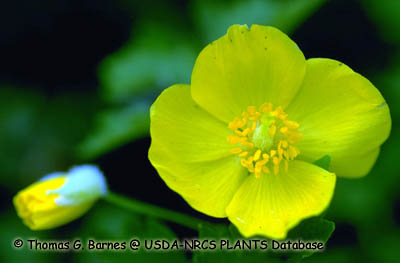 Wood-poppy is a perennial herb that grows up to about 40 cm tall. It develops from a stout horizontal underground stem, or rhizome. All parts of this plant are hairy and contain yellow or orange rubbery sap. Wood-poppy flowers in early spring. Its large, showy yellow flowers have four petals 2 to 5 cm in length. A cluster of between one and four flowers above two or three leaves is produced at the end of an elongated shoot. The fruit is a hairy, greyish capsule that splits into three or four segments when it ripens. The leaves, which grow mainly at the base of the plant, have long stalks, or petioles, and are pale underneath. They are deeply divided into five to seven lobes.

Wood-poppy is restricted to northeastern North America. Its range is centred in Kentucky and Missouri, but it extends as far south as Georgia and Alabama in the United States and as far north as southern Ontario in Canada. In the western part of its range, it is found in Arkansas, eastern Missouri and Michigan. Four historical Wood-poppy collections were made in Ontario in the 1880s; all were along the Thames River, near London, but these populations are now extirpated. Three extant populations occur in the same area, in London, Fanshawe and Ilderton. The total Canadian population in 2006 was about 529 mature plants. The largest known population was reduced from about 800 plants to about 170 in 1993, when it was partially covered by fill. Since then, it has increased slightly to about 250 individuals, although this is not based on a detailed census. The other two populations have both increased slightly since 2004, but it is not clear whether this is a short-term natural fluctuation or a long-term trend.

Wood-poppy is typically found in rich, moist woods, forested ravines and slopes, ravine bottoms, along woodland streams, and at the base of bluffs. In Ontario (the northern limit of its range), it is found in wooded ravines and on valley slopes in deciduous forests dominated by sugar maple, white ash, American beech and black cherry.

Wood-poppy is a typical herb of the deciduous forest. It starts growing in mid- to late April from a short, stocky rhizome. It flowers from May to early June, with the seeds dispersed from late June to July. The plant stays green until late September or early October, then dies back. Seeds set readily on flowers, which may be self-pollinated or may receive pollen from other flowers. By early fall, the fruit have disintegrated and released the seeds. Each capsule contains an average of 39 seeds, which have a conspicuous oily outgrowth that attracts ants, which help to disperse the seeds. Seeds require a dormant period in the cold before they germinate. Plants may flower in their first year but usually do not do so in the wild. Once established, plants often survive for five years or more. Wood-poppy generally grows in dense clumps, but outlying individuals have been observed in the southern Ontario population.

Threats identified for Wood-poppy in Canada are habitat destruction and modification caused by logging, impacts from adjacent development, and competition from invasive species. Habitat destruction by fill was the primary cause of the decrease in the London population in 1993. The Ilderton population is at the edge of an active sugar bush. Some activities in the sugar bush, such as logging or the creation of access roads, could damage the population. Further disruption may occur with the expansion of a housing development and other commercial activities adjacent to the two sites. Recreational activities as well as collecting present a threat to the species. The London population is in an area where there is a high level of off-road bicycle traffic. Unauthorized trails are created from time to time, and some of these are close to the Wood-poppy. At Fanshawe, a trail close to the population was relocated in 1998, and the threat from trampling has diminished. Genetic contamination constitutes yet another threat to Wood-poppy. This attractive plant is available in nurseries in southern Ontario. The origin of this commercial stock is unknown, but it is undoubtedly from the United States. Knowing that the plant grows in the wild in Ontario, some well-meaning enthusiasts have introduced the nursery stock into ravines and other natural areas. Records are not usually kept of these introductions. The Canadian populations may be genetically distinct from American populations, and Canadian plants could be genetically contaminated by American stock. This would make any recovery hard to track, because native and introduced populations may look the same.

Wood-poppy and its habitat are protected under the Ontario Endangered Species Act, 2007. The Fanshawe population is in a conservation area owned and managed by the Upper Thames River Conservation Authority. This organization is aware of the presence of Wood-poppy on the property and has managed the site to help protect the plants by re-routing a trail and installing signage.

Summary of Progress to Date The aim of the Wood-poppy recovery team is to protect existing populations of this naturally rare species, using habitat management and population augmentation where appropriate. The Wood-poppy is found on two private properties and one conservation area in Ontario, and all three landowners are actively involved in the species’ recovery. An ongoing challenge is presented by illegal mountain biking at one site. Summary of Research/Monitoring Activities Surveys and research indicate that the Wood-poppy is naturally rare in Ontario, which has informed the recovery team’s decision to focus conservation efforts on existing populations rather than increasing the number of populations in Ontario. In 1995, research projects were initiated to try to identify the cause of the Wood-poppy’s rarity as well as the genetic relationship among populations in Ontario and in the United States. Cultivated populations of Woody-poppy are being used in a study of factors that influence pollination and seed dispersal. Leaf samples collected from Wood-poppies in Ontario as well as several States are being used in genetic analyses which will determine if Wood-poppies in Ontario suffer from inbreeding (insufficient genetic diversity due to small population size) and will clarify the relationship among Canadian and American populations. Summary of Recovery Activities Stewardship takes place at all three Wood-poppy sites, with particular emphasis on reducing the impact of visitors on the flowers with signage and by locating trails where they divert traffic away from Wood-poppies. Also, invasive exotic plant species are controlled. Population augmentation is planned for one population in 2005. Wood-poppy seeds germinate much better under cultivation than in the wild. Therefore, seeds will be collected from the wild population, grown in cultivation, and then planted in the wild population.