Scientific Name: Castanea dentata
Taxonomy Group: Vascular Plants
COSEWIC Range: Ontario
COSEWIC Assessment Date and Status Change: November 2004
COSEWIC Status: Endangered
COSEWIC Status Criteria: A4ace; B2ab(ii,iii,iv,v); C2a(i); D1
COSEWIC Reason for Designation: Once a dominant tree in well drained forests of the Eastern Deciduous Forest, this species was devastated by chestnut blight in the first part of the 20th century. The species is still present throughout most of its former range, but as a few scattered individuals that have sprouted from root crowns. Most of these succumb to the blight before reaching a substantial size and fewer than 150 are large enough to produce seed. The species requires cross-pollination and seed set is reduced because mature individuals are widely scattered. Threats to the species include the continuous presence of the blight, aging and attrition of the root crowns, land clearing in some remaining sites, and hybridization with other species.
COSEWIC History of Status Designation: Designated Threatened in April 1987. Status re-examined and designated Endangered in November 2004.
SARA Status: Schedule 1, Endangered
Date of Listing (yyyy-mm-dd): 2006-08-15 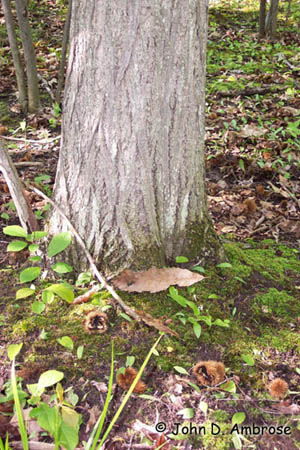 American chestnut is a member of the beech family. It is the only species of chestnut native to Canada. It has elongate leaves tapered at both ends and large teeth along the margins. Flowers are arranged in catkins with numerous tiny male flowers and a cluster of several female flowers at the base of some of the catkins. When cross-pollinated with another chestnut tree by an insect pollinator, the female flowers develop into spiny bur-like fruits enclosing one to several chestnuts. This species once was a dominant tree in many areas of the eastern deciduous forests of North America, but has been greatly reduced by the introduction of the chestnut blight disease a century ago. (Updated 2017/05/30)

This species occurs throughout eastern North America from southern Maine to southern Ontario and Michigan, south to Georgia to Mississippi. Remnants of once large populations of this tree still survive across most of its historical range in southern Ontario as well as most of the states within its range to the south. (Updated 2017/05/30)

This species is a shade-tolerant forest tree needing a canopy cover for effective seedling establishment. It produces both male and female flowers on the same tree in late spring to early summer. It is insect pollinated and requires cross-pollination for seed set. Nuts are produced in the fall of the same year and are sought after by squirrels, chipmunks and large birds that also disperse the seeds beyond the parent trees. (Updated 2017/05/30)

The introduction of the chestnut blight fungus in about 1904 devastated populations of this species throughout its natural range, including its Canadian distribution in southern Ontario. Most individuals are stump sprouts that never reach fruiting size. Recovery planning has identified possible hybridization with Asian species in native stands as another potential threat. (Updated 2017/05/30)