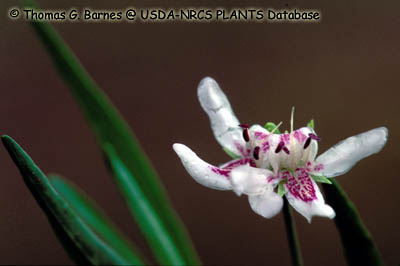 The American Water-willow is an aquatic herb which grows 20 to 100 cm high. Stems develop at the base of the main stem (which may be simple or branched) and run along the surface of the ground. The leaves are undivided, narrow and elongated in shape, and occur in opposite pairs along the stem. White or pale violet, tube-shaped flowers appear on long thin stalks that originate at the junction of the upper leaves with the main stem. The fruit is a capsule which contains 2 to 4 beige or light brown seeds.

The American Water-willow occurs in east central North America, and extends as far south as Georgia and Texas. In Canada, it is at the northern edge of its range in southern Quebec ( along the St. Lawrence River near Montreal) and southern Ontario (along Lake Erie). It has been known to occur at eight sites in the two provinces, but it has disappeared from several of these. The total number of known stems in Canada is about 400,000, and this has changed little over the last 15 years.

The American Water-willow grows along shorelines and sometimes in nearby wetlands, as well as along streams where the bottom is composed of gravel, sand or organic matter. It prefers areas of hard water; it either grows above the water or is submerged.

In Canada, the American Water-willow is at the northern limit of its distribution. It is a pioneering species that helps to stabilize banks and needs open habitat with little competition from other plants. It lives in colonies with others of its kind. Growth begins in the spring and flowering occurs in May or early summer. Bees are the main pollinators. The seeds mature from mid-July to the end of the summer. The species reproduces from seeds and also spreads by underground rhizomes to form colonies of up to 100,000 stems.

Summary of Progress to Date In 2006, field visits were conducted in Ontario and Quebec reconfirming the presence and status of the American Water-willow in two sites in Ontario, The Niagara Parks Commission site (on Dufferin Islands), and Lyon’s Creek site. Summary of Research/Monitoring Activities The American Water-willow is continually monitored by Éco-Nature as part of their yearly stewardship activities. The National Heritage Information Centre is surveying for the American Water-willow in Long Point National Wildlife Area and Port Burwell Provincial Park. An inventory of the American Water-willow will be taken in Point Pelee National Park. In partnership with Brock University, Niagara Parks Commission is creating a management plan for the recovery of this species on Dufferin Islands. Summary of Recovery Activities Wetland restoration projects are taking place on Pelee Island. Since 2001, Éco-nature has been involved in stewardship activities, including inventories and education and awareness along Rivière des Mille-Iles. URLs Éco-Nature: Parc de la Riviére des Mille-îIes: http://www.parc-mille-iles.qc.ca/indexhf.htm McGill University: Canada’s Species at Risk:http://www.canadianbiodiversity.mcgill.ca/english/species/endangered/endangeredpages/jun_ame.htm Niagara Parks Commission:http://www.niagaraparksnature.com/