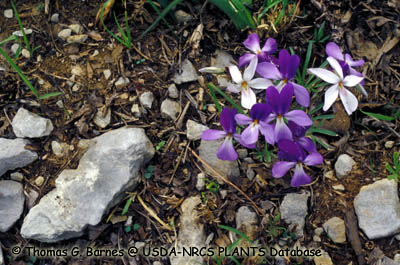 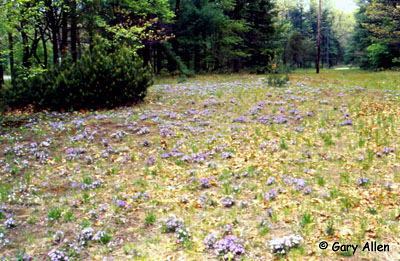 The Bird's-foot Violet is a stemless perennial herb; the leaves and stalks arise from an underground stem called a rhizome. The leaves have no hairs and are primarily three-parted, with the divisions being further subdivided into three to five linear segments. A single lilac-purple flower is borne at the end of each tall flower stalk. The flower has five petals, which may all be the same colour, or the upper two may be darker than the lower three. The small seeds, which measure 2.0 to 2.2 mm, are copper coloured.

The species occurs in eastern North America from Ontario and New York south to Georgia and west to Minnesota and Texas. In Canada, the Bird’s-foot Violet is found only in southern Ontario. The populations in Canada occur as isolated pockets separated from the main population found in the United States. According to data reported in 2001, there are five populations in Canada; three occur on private land and two on public land. In total, there are fewer than 7000 Bird's-foot Violets, a decline of between 25 and 50% from 1991 to 2001.

The Bird’s-foot Violet is typically found in Black Oak savannahs within deciduous forests, where the soils are sandy, acidic, and well drained. Occasional disturbance, resulting from natural events (such as fire or flood), or through selective cutting, is necessary to limit excessive shading from encroaching trees and shrubs. In southern Ontario, the Bird’s-foot Violet is at the northernmost edge of its range.

In Canada, the Bird’s-foot Violet flowers from mid-May until mid-June and again from the end of September to mid-October. Insects, such as butterflies and bumblebees, are the main pollinators. Unlike many other violets, the Bird’s-foot Violet can only reproduce by seeds resulting from cross-pollination. The seeds are projected up to half a metre from the plant. They are often picked up by ants and brought to nests, which reduces predation on seeds and increases the chances of reproduction. This species cannot be successfully transplanted.

Destruction of habitat caused by the expansion of agriculture has limited populations of the Bird’s-foot Violet. The violet occurs in one of the most developed parts of the country where the oak savannah habitat required by the species is rare. Competition from woody plants is also a problem for this species. In the past, the savannahs inhabited by Bird’s-foot Violets were often the scenes of fires, but as human control of fires increases, other species of plants are taking over the habitat of this violet. Such human activities as mowing and herbicide use are also detrimental to populations of the Bird’s-foot Violet.

Summary of Research/Monitoring Activities Turkey Point and Vittoria populations are monitored annually by the Ontario Ministry of Natural Resources. Post-prescribed burn monitoring has been conducted in Turkey Point Provincial Park and St. Williams Conservation Reserve in 2005 to study the species response to oak savanna restoration efforts. A master’s thesis study was also conducted in 2005 to explore habitat quality and population size relationships among multiple sites. Summary of Recovery Activities A comprehensive database of Bird’s foot violet sites along with other tallgrass and savanna sites has been developed to provide information to aid the maintenance and expansion of the sites. Tallgrass Ontario has been working to raise awareness, coordinate recovery efforts, and help provide local groups with the tools they need to do the job. It is important for individuals and local groups to participate in recovery programs to save and recover some of the species. Fire management has been used in Turkey Point Provincial Park since 1994 and St. Williams Conservation Reserve since 2005 to maintain and restore valuable oak savanna habitat for Bird’s Foot Violet populations. URLs Ontario Ministry of Natural Resources:http://www.mnr.gov.on.ca/MNR/csb/news/2005/dec2bg_05.html Tallgrass Ontario:http://www.tallgrassontario.org/TS_SAR_List.htm Ontario Botanists in Training Program:http://www.rbg.ca/cbcn/en/cbcn4kids/kid_ont.htm