Scientific Name: Numenius borealis
Taxonomy Group: Birds
COSEWIC Range: Yukon, Northwest Territories, Nunavut, Alberta, Saskatchewan, Manitoba, Ontario, Quebec, New Brunswick, Prince Edward Island, Nova Scotia, Newfoundland and Labrador
COSEWIC Assessment Date and Status Change: November 2009
COSEWIC Status: Endangered
COSEWIC Status Criteria: D1
COSEWIC Reason for Designation: This bird is a species of shorebird with 100% of its known breeding range in Arctic Canada. Formerly abundant, the population collapsed in the late 1800s, primarily owing to uncontrolled market hunting and dramatic losses in the amount and quality of spring stopover habitat (native grasslands). The population has never recovered, and there have been no confirmed breeding records for over 100 years, nor any confirmed records of birds (photographs/specimens) since 1963. As such, less than 50 years have elapsed since the last confirmed record. However, there are some recent sight records that suggest the possibility that a very small population (fewer than 50 mature individuals) may still persist in remote arctic landscapes. The primary factors limiting recovery are the very low population size, no known chance of rescue from outside populations, and the historic and ongoing conversion of native grasslands on its spring staging areas in Canada and the U.S. and on its wintering grounds in Argentina.
COSEWIC History of Status Designation: Designated Endangered in April 1978. Status re-examined and confirmed Endangered in May 2000 and November 2009.
SARA Status: Schedule 1, Endangered
Date of Listing (yyyy-mm-dd): 2003-06-05 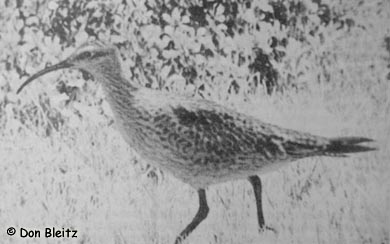 The Eskimo Curlew is a mottled brownish shorebird with long legs and a fairly long, thin, slightly down-curving bill. Its upper parts are brown, while its breast and abdomen are buff. It has a solid brown crown and cinnamon coloured under-wings. The Eskimo Curlew resembles the more common Whimbrel, but is much smaller (pigeon-sized).

The Eskimo Curlew was once one of the most numerous birds in Canada. The known breeding range was located entirely within the Mackenzie District of the Northwest Territories, but it probably bred throughout much of the Northwest Territories, possibly in the Yukon and Alaska, and perhaps in extreme western Russia. During migration it was found in all provinces except British Columbia. The species wintered in South America. The historic population was estimated to be in the hundreds of thousands, if not in the millions, before 1860, but declined dramatically in the 1870s to 1890s, and the species was almost extinct by 1900. No positively identified Eskimo Curlew nests or birds behaving as if they had nests or young have been found since 1866, even though searches have been carried out in historical breeding ranges in the 1970s, 1980s, and 1990s. In addition, no Eskimo Curlews were found during extensive searches in historical wintering areas of Argentina and Uruguay in 1992–1993. Population estimates from the 1970s, 1980s, and 1990s varied from 23 to 100 birds; however, these were based on guesswork. It is possible that this species has since gone extinct.

Eskimo Curlews formerly bred in the tundra and woodland transition zones of the Mackenzie District in the Northwest Territories, and possibly occurred as far west as Alaska or even Siberia. The breeding habitat consisted of treeless upland tundra with dwarf shrubs and grassy tundra meadows. During fall migration, the birds used a variety of coastal and terrestrial habitats. They fed in areas of crowberry, salt marsh, meadows, pastures, old fields, intertidal flats and sand dunes. During the winter in the pampas of Argentina, they used treeless grasslands with wetlands and may have used wetter grasslands and intertidal areas. In spring, the curlews were found in tallgrass and eastern mixed-grass prairies, often in areas disturbed by recent fires, areas near water disturbed by grazing bison, and in cultivated fields. Present day habitat use is unknown.

Eskimo Curlews arrived in their breeding grounds in late May, and quickly established nesting territories. From mid to late June, clutches of four eggs were laid in nests in shallow depressions scraped in the ground. The birds were presumably monogamous (each male mated with one female), as in related species, with incubation shared by both parents. The young hatched from early to mid July and as other North American shorebirds, were precocial (left the nest with the parents within a day or two of hatching and fed themselves from the first day). They were ready to migrate by the end of the month. Only one brood was raised per season. Nothing is known about breeding age, nest success, or adult and juvenile mortality, but closely related species usually do not breed until three years old and are long-lived (10 to more than 30 years). During fall migration (July to October), most of the birds flew eastward to the Ungava Peninsula, then down the east coast to the Gulf of St. Lawrence. They staged primarily in Labrador and Newfoundland and in some years in Ontario, Quebec, the Maritimes and the New England states. The curlews usually flew non-stop from Labrador and Newfoundland over the Atlantic to South America, presumably wintering primarily on the pampas of Argentina but also in Uraguay and further south. In April and May, the returning flocks followed a more western route, moving northwards along the Pacific coast of South America, across Central America and the Gulf of Mexico, through Texas and the midwestern states, with some birds in the Canadian prairies. Primary foods included berries (especially blueberries and crowberries), insects (including beetles, and grasshopper eggs and young), snails, coastal shrimp-like invertebrates (isopods, amphipods), and earthworms.

Eskimo Curlews were hunted extensively because they were considered a delicacy, traveled in large dense flocks, were unafraid of humans, and had the habit of circling back within guns range when some members of the flock were shot. These characteristics made them particularly easy to harvest. Uncontrolled hunting during spring and fall migration is probably the most important reason for the drastic decline in numbers. In the fall, thousands were shot in Labrador, and many thousands were killed in New England when birds were forced to land by storms. Each spring huge numbers were shot in the Great Plains of the United States by market hunters. The role of habitat loss or of other possible limiting factors cannot be assessed, but habitat loss and alteration (e.g., conversion of grasslands to croplands) at staging sites in Canada and the United States and in wintering areas in South America may have contributed to the species' decline.

The Eskimo Curlew is protected by the federal Migratory Birds Convention Act. Under this Act, it is prohibited to kill, harm, or collect adults, young, and eggs. It is also protected by the Ontario, Manitoba, and Newfoundland and Labrador Endangered Species Acts and the Wildlife Acts in Alberta, Saskatchewan, and British Columbia. Historic and potentially suitable breeding habitat for this species in Canada is protected in the Anderson River Migratory Bird Sanctuary and Kendall Island Bird Sanctuary in the Northwest Territories.

The Eskimo Curlew is also included in Appendix I of the Convention on International Trade in Endangered Species of Wild Fauna and Flora (CITES), which sets controls on the international trade and movement of species that have been, or may be, threatened due to commercial exploitation.

Recovery Update The last Eskimo Curlew nest verified in Canada was found over a century ago. Historic breeding sites have since been surveyed without any success. Occasional sightings of the bird continue to be reported, and these are recorded. However, Eskimo Curlews are easily confused with a number of other shorebirds, so it is not certain that this once abundant species exists anymore. Recovery activities were suspended in 1995, pending the verification of the existence of the species in Canada.