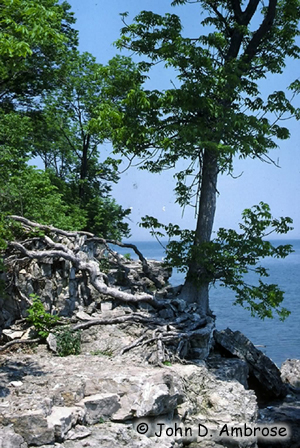 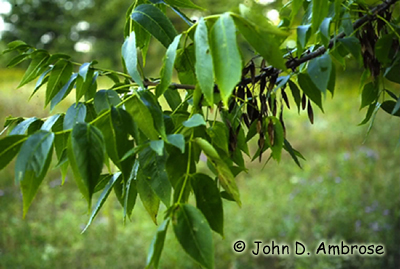 Blue Ash is a medium-sized tree, roughly 20 m in height and up to 80 cm in diameter, and is one of six ash species native to Canada. The trunk can be straight or irregular and the crown is narrow, small and rounded. Trees have light-coloured, reddish-grey or tan-grey, scaly bark. The leaves are compound and opposite with seven (5-11) leaflets and the twigs have square sides with four distinctive corky ridges or wings (hence the scientific epithet quadrangulata). Clusters of small flowers that lack petals are produced in spring, as new leaves are expanding. The fruits are single-seeded samaras that are usually twisted, with a notch in the broad wing. A distinctive feature is the retention of dead lower branches, giving the tree an untidy appearance. The inner bark contains a sticky substance that turns blue upon exposure to air (hence the species’ common name). (Updated 2017/06/02)

Blue Ash has a restricted distribution in Canada and occurs only in southwestern Ontario in the counties and municipalities of Elgin, Middlesex, Lambton, Chatham-Kent and Essex. It is found at Point Pelee, Peche Island at the mouth of the Detroit River, and the Erie Islands, as well as in river valleys along the Thames River, Sydenham River, and Catfish Creek. Blue Ash is more widely distributed in the United States, and ranges from Ohio south into Alabama, Georgia and Arkansas and west to Wisconsin, Oklahoma and Kansas. (Updated 2017/06/02)

Blue Ash grows in a variety of habitats and soil types. In Ontario, it is found in three distinctive habitat types. They include floodplains and river valleys where Blue Ash grows in rich soils in association with a variety of other tree species; shallow soils on alvar and limestone on the Lake Erie Islands; and stabilized beaches at Point Pelee National Park, and Fish Point on Pelee Island. All of these habitats have declined in area and quality over the last 100 years. While the effects of habitat fragmentation on Blue Ash have not been assessed, it is expected that fragmentation will result in ecological degradation and perhaps genetic degradation over a longer timeframe, which may contribute to decreasing the likelihood of persistence of subpopulations. (Updated 2017/06/02)

Unlike other ash species, flowers of Blue Ash include both male and female reproductive structures. The species reproduces by seed and there is no evidence of clonal spread. Blue Ash trees can live up to 300 years (typically 150 to 200 years) and age of maturity (fruiting age) is approximately 25 years. Seed crops are produced every 3-4 years and seeds are dispersed by wind. Most seeds likely disperse within 10 m of the parental tree, but a small number of seeds may travel up to 200 m. Seeds may be dispersed over larger distances by water or animal transport. (Updated 2017/06/02)

Since the last status assessment, the potential for deer browsing to impact recruitment and establishment of Blue Ash has emerged as a greater concern than previously noted. Although a few surveyed sites had very large numbers of seedlings and young trees, at many surveyed sites there was little evidence of regeneration suggesting that deer browsing could be preventing establishment of young trees. In addition, the invasive alien beetle Emerald Ash Borer (EAB) has emerged as a new threat to native ash species, including Blue Ash. First detected in North America in 2002, EAB has since spread rapidly. During surveys in 2012/2013, signs of EAB were found at 45.8% (11 out of 26) of the sites and in 70 (3.7%) Blue Ash trees. Although few Blue Ash trees appear to have been killed so far by EAB (0.26% of surveyed trees) and they appear to show resistance, it is unknown whether the impact of EAB will increase in the future. Additional threats to Blue Ash include forest management practices that may include direct cutting of Blue Ash trees because of misidentification by landowners, or authorities – either deliberately or because of EAB-related management; alteration to natural disturbance regimes through fire suppression and water management; impacts of livestock farming and ranching including grazing and trampling in riparian habitats; recreational activities (e.g., all-terrain vehicles in local areas), which could impact regeneration through trampling; and, at Middle Island, nitrification of soils and damage to trees from Double-crested Cormorant guano and nesting activities. (Updated 2017/06/02)