Scientific Name: Woodsia obtusa
Taxonomy Group: Vascular Plants
COSEWIC Range: Ontario, Quebec
COSEWIC Assessment Date and Status Change: April 2007
COSEWIC Status: Threatened
COSEWIC Status Criteria: Met criteria for Endangered, B2ab(ii,iii,iv,v), but designated Threatened, C2a(i), because most plants are in protected areas or undisturbed sites where recruitment is occurring.
COSEWIC Reason for Designation: A species with a highly fragmented distribution in Canada where it is known only from southeastern Ontario and southwestern Quebec at eight small localized sites.  One additional population is now considered to be extirpated. The fern occurs almost exclusively on warm and relatively dry calcareous rocky slopes.  The total Canadian population consists of fewer than 1400 mature plants. The primary threat is at the largest population due to the anticipated loss of habitat quality and decline in the fern population as a consequence of the presence and spread of an exotic invasive shrub.  Most sites, however, are in protected areas or undisturbed sites where recruitment is occurring.
COSEWIC History of Status Designation: Designated Threatened in April 1994. Status re-examined and designated Endangered in May 2000. Status re-examined and designated Threatened in April 2007.
SARA Status: Schedule 1, Threatened
Date of Listing (yyyy-mm-dd): 2003-06-05 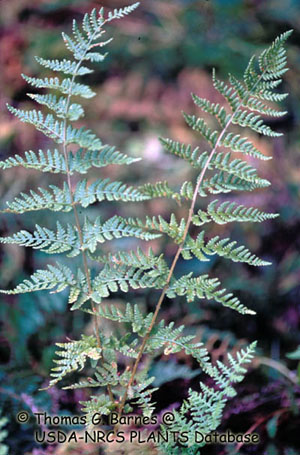 There are two subspecies of Blunt-lobed Woodsia Woodsia obtusa: W. obtusa obtusa and W. obtusa occidentalis. Since only the obtusa subspecies occurs in Canada, it is considered a distinct species there.

Blunt-lobed Woodsia is a small- to medium-sized fern. The fronds, which resemble large compound leaves, can grow to 60 cm in length by 15 cm in width. This species is characterized by the rounded lobes of its fronds, which remain a vivid green until late fall. The straw-coloured frond stalk (or rachis) is occasionally darker at its base. The main part of the frond is made up of segments called leaflets. The frond contains 8 to 17 pairs of leaflets that, in turn, are made up of smaller toothed segments. Blunt-lobed Woodsia is easily confused with Fragile Fern, another fern species that is less stiff.

Blunt-lobed Woodsia is common and widespread in the eastern United States. The species extends northward to southeast Canada and southward to south-central Texas and northern Florida. There are only nine known populations in Canada, all of which are in Ontario or Quebec and less than 100 km from the United States border. One of these populations is now considered to have disappeared. The four Ontario populations are concentrated in the southeast of the province, ranging from the Gananoque-Brockville area along the St. Lawrence northward to the Westport area. Three of the sites are a few kilometres apart on the north shores of the Big Rideau and Sand lakes near Westport. The fourth is in Frontenac Provincial Park, approximately 20 km southwest of the other three sites. The four Quebec populations occur in two separate regions: Gatineau Park and Missisquoi County. Overall, population sizes appear to have grown in each of the sites visited in 2005. However, this growth may simply be a reflection of the increased intensity of the latest search operations or it may be that the visits occurred during a year that was particularly good for observing the species by producing healthy individuals that were easy to locate. The entire Canadian population is estimated to comprise fewer than 1400 mature individuals. Although the degree of decline is uncertain, it is likely attributable to the Common Buckthorn, an invasive alien shrub.

All the Canadian populations are located on rocky limestone outcrops in the Great Lakes and St. Lawrence forest areas where the average soil depth is 3.5 cm. They grow on south-facing slopes exposed to warm, relatively dry conditions. Blunt-lobed Blunt-lobed Woodsia is typically found in sugar maple forests mixed with Red Oak, White Oak, White Ash and Ironwood, where the trees provide significant cover. It is also associated with other ferns, such as Marginal Shield Fern and Rusty Woodsia. None of the sites appear to have been drastically changed over the past few years. They are mostly located in abandoned or rarely used areas that are unlikely to be disturbed by human activity.

Blunt-lobed Woodsia is a perennial fern that can undoubtedly live for several decades. Every year, it produces a large quantity of spores in late summer and early fall. These minuscule cells become plants with male or female reproductive organs. Young plants require damp environments with highly calcareous soils to develop. As some individuals are bisexual, producing both male and female reproductive cells, they can reproduce without the assistance of another individual. Blunt-lobed Woodsia does not appear to reproduce vegetatively through the development of rhizomes (underground horizontal stems).

The main threat to this species is undoubtedly the absence of calcareous habitats. On a smaller scale, the main limiting factor for this species is likely related to the lack of water, which leads to reduced spore germination and fertilization rates. Brush clearing and tree removal along the crest of the slope with the largest Canadian population (Sand Lake in Westport) resulted in minimal habitat disruption around the ferns in areas where branches were thrown. However, these activities do have a more harmful impact: by clearing the forest cover, they promote the establishment and spread of Common Buckthorn, an invasive alien shrub that could seriously compromise the habitat of the Blunt-lobed Woodsia, as well as its ability to survive.

Summary of Progress to Date The Blunt-lobed Woodsia recovery team aims to protect existing populations and is assessing whether reintroduction and/or augmentation are appropriate recovery tools for this rare species. Summary of Research/Monitoring Activities Observations during the 1990s and an intensive survey of Blunt-lobed Woodsia in 2001 suggest that the population is stable. Having previously clarified the fern’s habitat requirements, researchers are mapping suitable habitat. In many cases Blunt-lobed Woodsia is absent from sites that have apparently suitable habitat and that are close to occupied sites, suggesting that something other than habitat availability may be limiting the fern. Currently, researchers are investigating factors that may be limiting Blunt-lobed Woodsia dispersal and/or establishment. Summary of Recovery Activities Blunt-lobed Woodsia is protected in Ontario’s Frontenac Provincial park and Gatineau Park in Quebec. Blunt-lobed Woodsia often grows on slopes with loose rock, and is therefore easily disturbed by people walking nearby. Park trails are routed so as to prevent this disturbance. Blunt-lobed Woodsia also occurs on private lands. The recovery team has contacted landowners to create awareness about regulations under Ontario’s Endangered Species Act, as well as the opportunity for tax relief through Ontario’s Conservation Land Tax Incentive Program.