Scientific Name: Smilax rotundifolia
Taxonomy Group: Vascular Plants
COSEWIC Range: Ontario
COSEWIC Assessment Date and Status Change: November 2007
COSEWIC Status: Threatened
COSEWIC Status Criteria: Met criteria for Endangered, B1ab(iii)+2ab(iii), but designated Threatened, B1ab(iii)+2ab(iii), because plants are long-lived vines reproducing vigorously by vegetative growth.
COSEWIC Reason for Designation: The species is currently known from 13 highly fragmented populations in Ontario’s Carolinian Zone.  Four populations have been found since the previous COSEWIC assessment due to more extensive surveys, and although no population was lost, habitat declines have occurred. Population size and trend are poorly known due to the clonal nature of the species.  Many Ontario populations appear to have plants of only one sex and therefore cannot produce seed.  The plants, however, are vigorous, long-lived and resistant to habitat changes.
COSEWIC History of Status Designation: Designated Threatened in April 1994. Status re-examined and confirmed in May 2001 and November 2007.
SARA Status: Schedule 1, Threatened
Date of Listing (yyyy-mm-dd): 2003-06-05 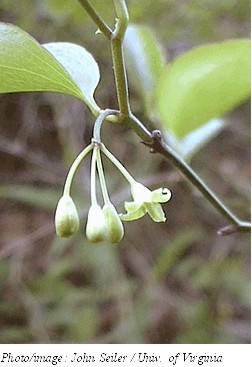 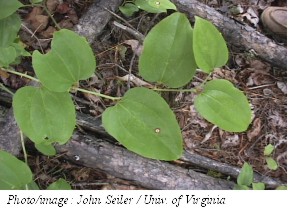 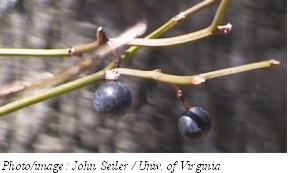 Round-leaved greenbrier (Smilax rotundifolia) is a woody climbing vine that can reach a length of over four metres. Main stems are rounded and bear stout flattened prickles; its branchlets are sometimes four-angled. Leaves are alternate and simple, 5-10 cm long, with an ovate blade and a heart-shaped base. Plants are unisexual, with the small green male and female flowers clustered in rounded umbels whose stems arise from the leaf angles. Each female umbel produces a few blue-black, mostly two-seeded berries. (Updated 2017/05/24)

The species is found across much of eastern North America from southwestern Nova Scotia to northern Florida, eastern Texas and north to eastern Michigan and southwestern Ontario. In Canada, it occurs near the north shore of Lake Erie in southern Ontario and in southwestern Nova Scotia. The 13 extant populations in Ontario cover an Extent of Occurrence of about 2500 km² and an Area of Occupancy of 13 km² if a 1x1 km grid is applied and 40 km² if a 2x2 km grid is used. The >50 Nova Scotia populations have an Extent of Occurrence of > 50 km². There are 14 confirmed sites of this species in Ontario, one of which is known to be extirpated. Six of the 13 potentially extant sites were confirmed in 2006 and one in 2007; one other was confirmed in 2005. The remaining five sites were not surveyed in 2006 but were assumed to be extant because the habitat was still present (landowners were either unavailable or they denied field workers access to their properties). Of the 13 sites, four have been discovered since the initial COSEWIC status assessment. There are between approximately 1000 and 5000 extant crowns (each representing a multi-stemmed “individual” that may or may not be physically separated from other such individuals). More than 50 occurrences are known from Nova Scotia where the total population is considered stable and consists of between 3,000 and 10,000 individuals. (Updated 2017/05/24)

In Ontario round-leaved greenbrier prefers open moist to wet woodlands, often growing on sandy soils. In Nova Scotia it commonly occurs along lakeshores. In other jurisdictions it is very variable in its habitat use. (Updated 2017/05/24)

This woody vine is dioecious, having its unisexual flowers on separate male and female plants. It forms clusters of shoots from a single crown and spreads vegetatively by its rhizomes and stolons. Only populations of mixed sexes produce fruits. Seeds seem to require a cold period before germination occurs. It is possible that for seedling establishment, open areas are required in the woodland canopy. Because of vegetative reproduction, the clones produced can become widely spread over time and individual clones can have a long life span. (Updated 2017/05/24)

Although round-leaved greenbrier reproduces asexually and is relatively long-lived, it is limited in Ontario because few sites are occupied by plants of both sexes. This limited capability for seed production potentially reduces the amount of natural variability and therefore the adaptability of the Ontario populations. Urban expansion and the reduction of available habitat in the Niagara area of Ontario also threaten the sites in this portion of the species' range. Threats to the Nova Scotia populations appear to be limited or absent in most cases. (Updated 2017/05/24)

The Round-leaved Greenbrier, Great Lakes Plains population, is protected under the federal Species at Risk Act (SARA). More information about SARA, including how it protects individual species, is available in the Species at Risk Act: A Guide.