Scientific Name: Aletris farinosa
Taxonomy Group: Vascular Plants
COSEWIC Range: Ontario
COSEWIC Assessment Date and Status Change: November 2015
COSEWIC Status: Endangered
COSEWIC Status Criteria: A2ace+3ce+4ace
COSEWIC Reason for Designation: This perennial herb is restricted to remnant, disturbance-dependent prairie habitats in southwestern Ontario. It continues to decline in the face of multiple threats, including habitat modification, invasive species, and browsing by deer. Prairie habitat, for example, naturally transitions to less suitable habitat types in the absence of periodic disturbance (e.g., fire), and its quality and extent are also vulnerable to ongoing urban and industrial development. Recent construction of a new transportation corridor caused the removal of more than 50% of all mature plants in the Canadian population and loss of habitat. Although plants have been transplanted from the transportation corridor to nearby restoration sites, it is too early to know whether these relocated subpopulations will be self-sustaining so they cannot yet be considered to contribute to the population.
COSEWIC History of Status Designation: Designated Threatened in April 1988. Status re-examined and confirmed in November 2000. Status re-examined and designated Endangered in November 2015.
SARA Status: Schedule 1, Endangered
Date of Listing (yyyy-mm-dd): 2003-06-05 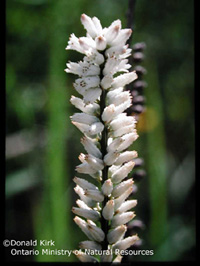 Colicroot (Aletris farinosa) is a herbaceous perennial in the Bog Asphodel Family (Nartheciaceae). It has a basal rosette of yellowy-green, lance-shaped leaves. In early summer, it produces an upright flowering stalk about 40 – 100 cm tall, with a spike of small, white flowers with a mealy texture. After flowering, the dried petals remain on the fruit capsules. Colicroot has been used to treat menstrual and uterine problems and contains active chemicals that may have hormonal properties. (Updated 2016/12/15)

In Canada, Colicroot is restricted to four geographic regions in southwestern Ontario: the City of Windsor-Town of LaSalle; Walpole Island; near Eagle (Municipality of West Elgin); and is inferred to be extirpated near Turkey Point (Haldimand-Norfolk County). (Updated 2016/12/15)

Colicroot grows in open, moist, sandy ground associated with tallgrass prairie habitats and damp sandy meadows. It is currently found in prairie remnants, old fields, utility corridors, and woodland edges. It is intolerant of shading by surrounding vegetation. For habitat to remain suitable, some type of disturbance must occur to keep vegetation open, short, and sparse. Historically, fire probably maintained habitat but more recently, human activities, such as periodic mowing, cultivation, and the use of walking and bicycling trails, create disturbance in Colicroot habitat but keep habitat only marginally suitable. Loss of habitat due to succession is the number one cause of the decline of Colicroot and is an urgent threat. Habitat has also been lost to urban development, to construction of the Right Honourable Herb Gray Parkway (Parkway), and to conversion to agricultural use. Habitat in Parkway restoration sites and at some sites on Walpole Island is currently maintained by controlled burning and manual removal of woody and invasive species. However, habitat has been lost in Natural Heritage Areas and a provincial nature reserve, showing that Colicroot is not protected if management is not adequate. It is unknown whether habitat can be restored from a completely wooded state. (Updated 2016/12/15)

Colicroot is perennial and some plants probably live for decades. The time required to reach maturity from seed is unknown but is likely more than one year and probably depends on site conditions. It is unknown how long seeds remain viable or if there is a seed bank in the soil. In addition to sexual reproduction, vegetative reproduction is possible but infrequent from buds on the rhizome. Thus, some plants in a patch may not be genetically distinct individuals. Flowers are insect-pollinated, mainly by bumblebees and solitary bees. It is unknown whether the flowers are self-fertile. It has been suggested that Colicroot may have mycorrhizal requirements because, until recently, most attempts to transplant the species were unsuccessful. However, greenhouse tests found no evidence that mycorrhizal fungi confer an advantage. Colicroot has no specialized structures to assist dispersal. Flowering stalks are frequently eaten by deer or other herbivores, and the leaves are sometimes eaten by insects. It is unknown whether herbivores can disperse seeds through the gut. (Updated 2016/12/15)

Threats to Colicroot include 1) Lack of Disturbance, 2) Invasive Species, 3) Herbivory, and 4) Development. To maintain Colicroot, its habitat must be actively and frequently managed to arrest succession; most of the habitat isn’t managed this way, even in protected areas. Recreational activities may cause trampling but sometimes also provide necessary disturbance. It is unknown whether the net result is beneficial or detrimental. (Updated 2016/12/15)